Does Your Personality Type Determine Your Salary? Science Says Yes

Your salary is determined by many factors, including your experience and education. But have you ever considered the possibility that your personality also impacts how much you're paid?

Turns out, there is real data backing up the idea that your personality does indeed impact how much money you make.

According to Career Assessment Site, a company that administers Myers-Briggs and career assessment tests, self-motivated and driven personalities are more likely to be paid more.

The data is based on the Myers-Briggs Type Indicator, which places people into 16 different personality types. Developed in 1962 based on the principles of Jungian psychiatry, the test can tell you whether you're:

An ENFP type, for example, is extroverted, intuitive, feeling and perceiving. Let's take a look at the different personality types and how their earning potential compares. 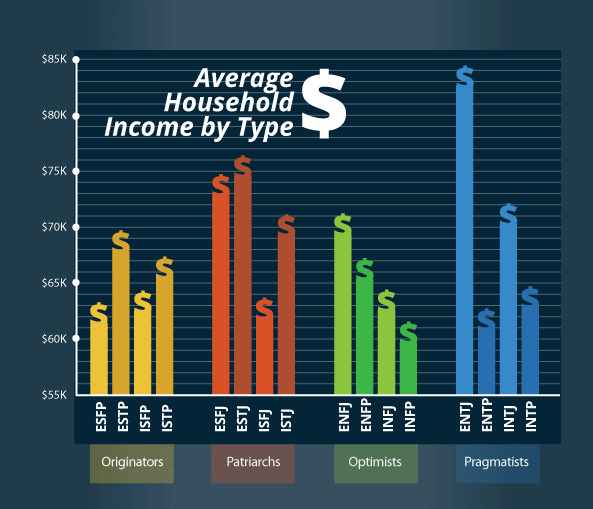 The 16 personality types can be categorized into the following four groups.

ENFJs are considered charismatic, warm, inspirational natural-born leaders. They form only about 2 percent of the population, and they include politicians and coaches. Salaries for ENFJs are the highest among this group, lying just under $70,000.

ENFPs earn a little over $65,000. Enthusiastic and imaginative, they are flexible and can read others and communicate well. They are often considered free spirits.

INFJs seek meaning in all things and want to understand what motivates people. They're insightful and good listeners. They are believed to make up less than 1 percent of the population, but they do leave their mark. This personality type makes about $63,000.

INFPs typically make around $60,000. This personality is considered a mediator, someone who has little interest controlling others and who is guided by their principals. They're considered loyal and helping. This type has the lowest household income of all 16 personalities.

Described as free-spirited "party people," people in this category on average have the lowest household incomes, between about $62,000 and $68,000.

Despite shying away from others and sometimes being withdrawn, ISFPs are loyal, committed and laidback, and they enjoy being in the present moment. Considered a "true artist," this personality type makes about $63,000.

ISTPs make a bit more: nearly $66,000. This personality type is curious; they love to examine the world around them.  In the workplace, they are also among the most productive.

ESTPs are impulsive, making quick decisions and yet they make friends and connections wherever they go. It might be this ability to network that makes them the best earners in this group. Their average household income is $68,000. They're also known for enjoying material comforts and focusing on the present.

ESFPs, on the other hand, make the least in the group: $61,500. This personality is known to be adaptable, lively, the center of attention, and loving people and experiences. Many famous people, including actors, are ESFPs.

The Patriarch is someone who likes to follow the rules and desires structure. Perhaps unsurprisingly, they include some of the the highest earners of all 16 personalities. The personality types that fall under this category have a household income ranging from $62,000 to nearly $75,000.

ISTJs generally make close to  $70,000. They make good money, perhaps, because ISTJs are orderly and organized, very responsible and serious. They value traditions and loyalty, and they care about getting the job done, making them the perfect employees.

ISFJs are responsible, friendly, and they remember specifics about people they care about. Known for great organizational skills and their eagerness to serve, their household income is $62,000, the lowest in this group.

ESFJs are warm-hearted, conscientious and cooperative. As they make $73,000, it's probably no surprise that this personality type is known for money management and honoring commitments.

ESTJs are the highest earners in the group, with an average household income of $75,000. This personality is practical, realistic and a natural born leader. They are loyal, committed and goal-oriented, and in the workplace, they complete tasks at the highest standard.

As someone who is creative, an insightful problem-solver and an idea generator, the Pragmatist category includes both the highest-earning personality type on the income spectrum, as well as some of the lowest.

ENTJs are excellent with money, frank and decisive, and they enjoy sharing their knowledge with others. They are good at goal-setting, are clear communicators and have excellent leadership skills. These qualities make them natural managers and executives. So it should be no surprise that ENTJs are the highest earners of all 16 personalities, with an average household income of nearly $83,0000.

ENTPs are the lowest paid of this group and among the lowest of all 16 personalities, earning $61,000. This personality type is known for being resourceful, problem-solving and laidback. They generate new ideas and are communicative.

INTJs are passionate about implementing their ideas and achieving their dreams, and so it seems natural that they're also intelligent and independent. This personality earns just over $70,000.

The average household income for INTPs is $63,000. Quiet, analytical and creative, they need intellectual stimulation in the workplace. Career paths in journalism, engineering, and data analysts suit this personality.

Are you surprised by any of the connections between personality and income? In addition to the Myers-Briggs personalities, there are many other ways we can gain insight into our finances. Learn about what our use of Venmo emojis can tell us about our spending habits.

Read more about how to achieve your financial freedom.