Do You Have to Pay Taxes on Student Loan Forgiveness Due to Disability?

The long answer goes a little more like nope, in most cases. As of January 1, 2018, if you get your student loan debt discharged due to disability, you won’t be taxed on the discharged amount. This is big news, because prior to then, you would get taxed on that amount.

How to qualify for loan discharge due to disability

Historically, it hasn’t been easy to get your federal student loans discharged due to disability. The standard for discharge is “total and permanent disability”—essentially an illness or injury that renders you incapable of working for the rest of your life.

For most people, the specific requirement is that you must demonstrate a physical or mental disability that will either lead to death or has lasted (or is likely to last) 60 months or more. If you’re a veteran, the standards are different and slightly less strict. 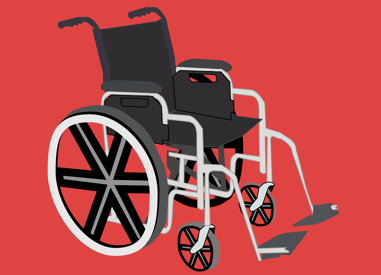 See also: Can You File for Bankruptcy on Your Student Loans?

To meet the standards to have your loans discharged, you have to qualify for Social Security disability benefits, either by being certified by a physician or through the Veterans Administration.

When you have to pay taxes

But before 2018, the federal government considered disability discharges as income—and taxed them as such.

This resulted in some hefty tax bills—sometimes in the tens of thousands, or more—for people already facing considerable challenges. It also got a lot of people kicked off Medicare, Supplemental Security Income, and other necessary benefits that are dependent on income.

That all changed with the Tax Cuts and Jobs Act of 2017. Under this new law, discharges on student loan debt are no longer recognized as income. Beneficiaries don’t have to pay taxes on it, and it won’t affect eligibility for other programs.

However, that tax relief isn’t retroactive. If your student loans were discharged prior to the law’s start date and you’ve been paying taxes on the amount forgiven, you’ll most likely still be on the hook for that amount.

And the picture gets a little more complicated if your discharge was approved prior to 2018, but you’re still in your three-year monitoring period.

During this time, you have to verify your income on an annual basis. If you forget—or if your income doesn’t continue to qualify—your discharge might be cancelled.

The good news, though, is that loan discharges aren’t reported to the IRS until after the monitoring period is over. If your discharge was approved prior to 2018 but you’re still in the three-year monitoring period, the IRS won’t find out about it until after 2018—and you shouldn’t have to pay taxes on the amount forgiven.

This gives some people whose discharges were approved prior to 2018 a handy loophole. But the situation is both good and bad news for veterans, who aren’t subject to the three-year monitoring period.

On the one hand, if you’re a veteran, once your discharge is approved, it’s approved—no further need to keep proving yourself eligible. On the other, if it was approved prior to 2018, you don’t have the three-year buffer working in your favor—and you’ll still have to pay taxes on your discharged amount.

The law isn’t permanent; it’s set to expire in 2025, so Congress will need to revisit it. Hopefully it will be reinstated, and the most vulnerable borrowers will no longer be subject to such difficult tax burdens.

Struggling with student loans? See how much you could save by refinancing.