Men are from Mars, Women are from Venmo: 4 Things Venmo Emojis Can Tell Us

You've probably been in some sort of money-related dilemma among friends before. A group of you go out to eat, you share a lot of items but some of your friends ordered more than you did, and you don't want to annoy the server by getting complicated about how you're splitting the bill.

Venmo, an app that allows you to send and receive money with the click of a button, has made these situations much easier. So Comet recently examined 18 million transactions to see how people use Venmo, and specifically the different ways men and women use emojis to communicate through the app.

Here are four interesting finds from that new study.

For example, hearts, sparkles, clothes and jewelry emojis were much more often used by women compared to men. In fact, 90% of two-heart emoji instances were by female users.

By contrast, men used emojis that represented traditionally masculine interests. Those include sports and beer emojis ... as well as fire. Is that primal thing? Do men just like really to grill? We'll leave it to you to figure out.

The bride veil emoji was ranked No. 3 as the most-used emoji by women.

On the other hand, men used the eggplant and peach emojis much more than women. These two are known for being, um, sexual. The peach looks like a behind, and the eggplant looks like the male sexual organ, after all.

3. A clear divide on beer and wine

According to a Gallup poll, half of American women prefer wine, while more than half of men prefer to drink beer. 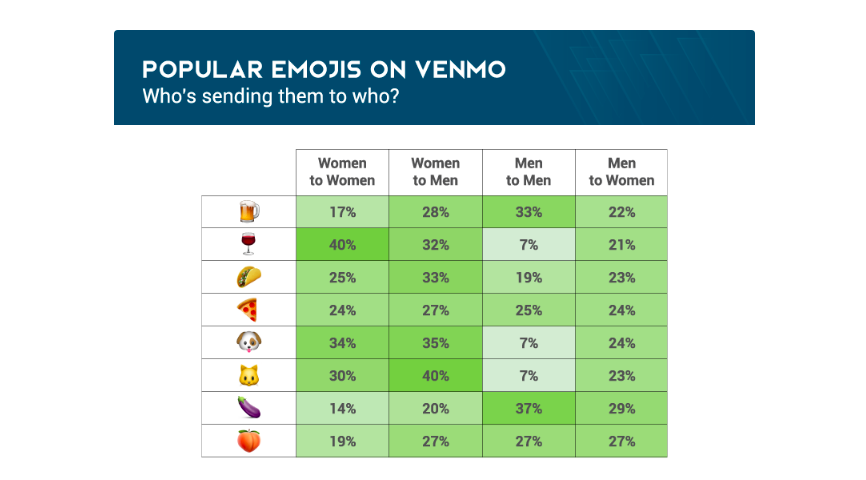 When requesting money, both men and women used the money with wings emoji more than any other emoji.

Among the most popular emojis for both genders are also the electric plug, lightning bolt, pizza and lightbulb. This isn't surprising. After all, these are all things you'd likely want to send or receive money for: food, likely shared among couples or friends, and electricity, probably shared among roommates.

Want to see how women and men stack up when it comes to relationships and careers? Check out our big takeaways from another recent Comet survey dealing love and money among millennials.