You may have heard it from friends and family or have seen it on any number of personal finance blogs or websites: You need a budget.

Even if you think you’ve got your money under control, or you aren’t living paycheck to paycheck, most finance gurus and experts will tell you that budgeting is one of, if not, the most important factors for managing your money successfully. Other actions like refinancing your student loans (if you have them) can be very beneficial under a number of circumstances, but budgeting is almost universal. And not having a budget in place is one of the quickest ways to land in debt. Not only can you lose track of the money you’re already spending, have no idea how much you could (or should) be .

Despite all of that sage wisdom and advice, most people still aren’t budgeting their money correctly. To help put the matter to rest, we surveyed 1,000 people about their saving and spending habits to show the importance of building a budget. We wanted to know how much budgeting added back to their life, how it helped reduce their monthly expenses, and how well it prepared them for life events like changing careers. Would you like to be in charge of your finances? Read on to see what we discovered. 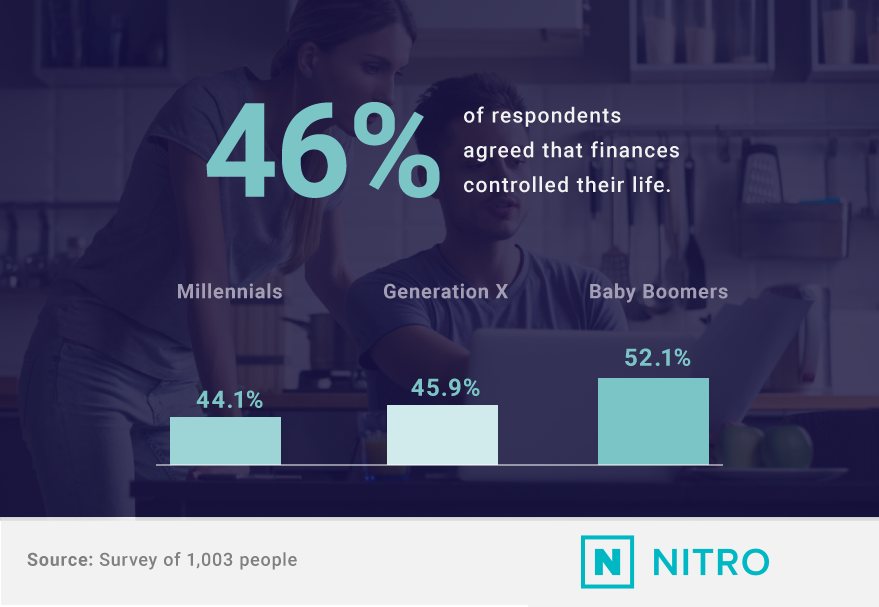 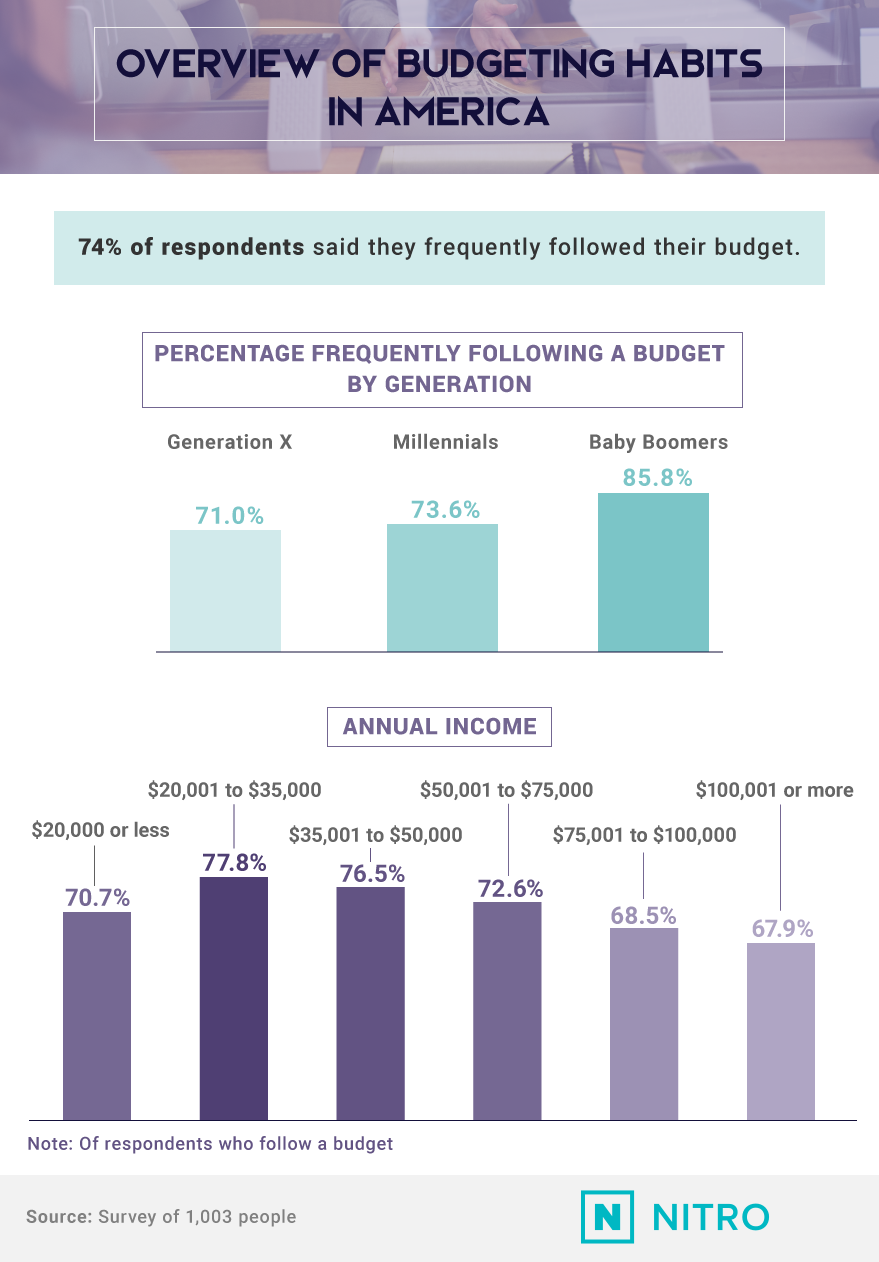 While so many people agreed finances controlled their life, a majority also followed a budget.

Across our pool of survey respondents, no demographic was more in tune with money management than baby boomers. As the closest group to retirement, they’re likely the most aware of the importance of budgeting. Analysts suggest the average person needs anywhere from eight to 12 times their pre-tax income saved by the time they’re 65 to retire comfortably. By some estimations, that could amount to $1 million or more in savings depending on a person’s lifestyle and expenses.

Despite what you might think about millennials and their spending habits, over 73% of the younger people surveyed had a working budget too. Of course, budgeting for younger generations may not be as much about preparing for the future as it is about living in the present. With student loan debt (and monthly payments) on the rise, money is a constant concern for most millennials today. Regardless of age, budgeting was typically a practice employed by people earning less money overall. Compared to the 68% of people earning over $100,000, nearly 78% making between $20,001 and $35,000 were bound to a budget of some kind. 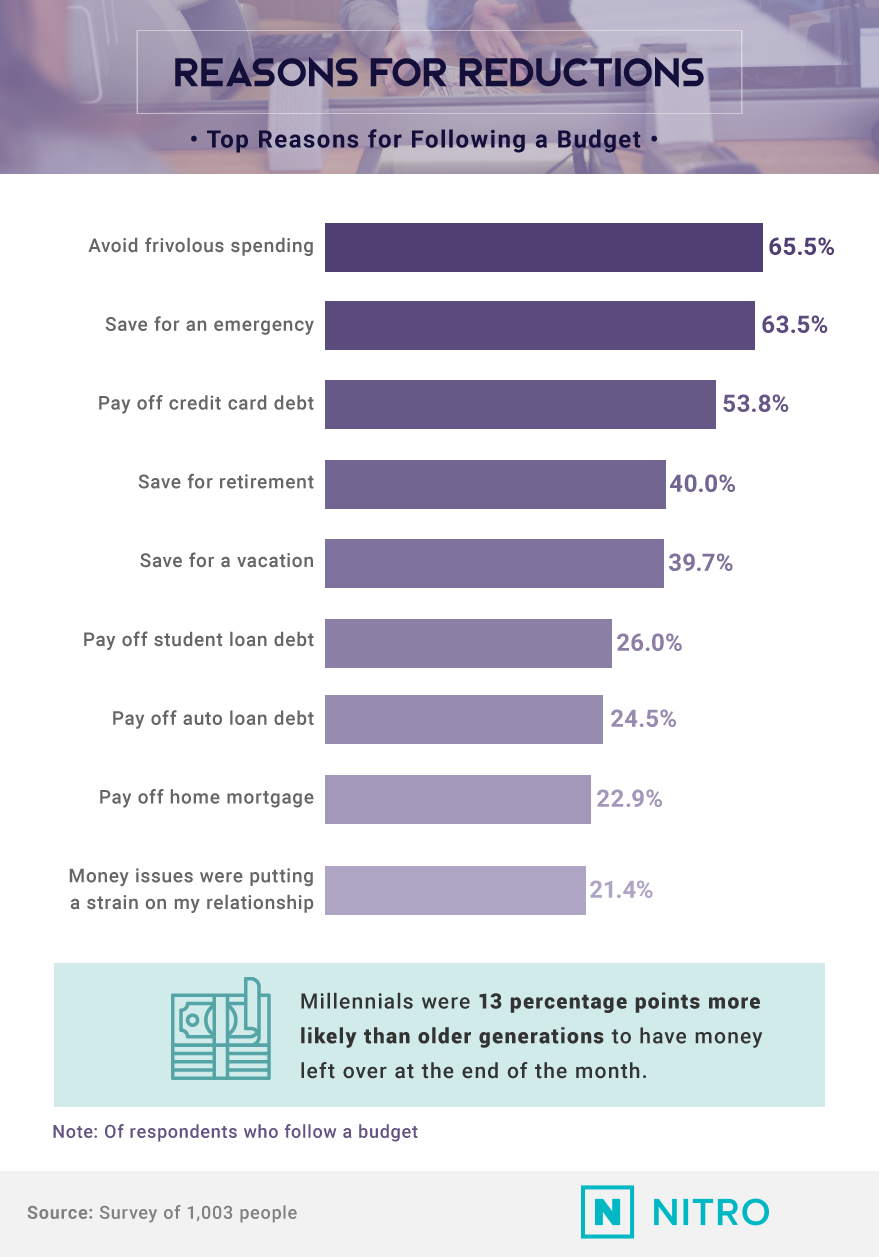 What inspired people to take the initiative and build a budget? For most people, the answer was simple: to avoid frivolous spending or save for an emergency.

According to a recent Pew study, more than half of Americans spend more money every month than they earn. While some of that money goes to necessary costs like housing and transportation, it’s important to recognize how much of our total income is spent on things we may not necessarily need. The average family spends 5% of their total income on entertainment – more than $2,900 monthly. There’s also a common rule of thumb that suggests you shouldn’t spend more than 28% of your income on a mortgage, although the U.S. average is 33%, accounting for about $19,000 a year in monthly expenses.

Being prepared for an emergency (over 63%), paying off credit card debt (54%), and saving for retirement (40%) were all popular reasons for instituting a spending protocol. While paying off student loan debt was a motivating factor for 26% of people, millennials were 14 percentage points more likely than older generations to have money left over at the end of the month.

Until you keep track of where every dollar comes and goes, you might miss key signs that you’re overspending on certain expenses. One $4 coffee may not seem like a lot, but if you’re buying that coffee five days a week, it could turn into $80 a month and $960 a year or more. Nearly 68% of people said their financial situation improved after they followed a budget.

While roughly 1 in 4 people admitted to rarely following their budget, respondents who followed a budget were able to identify key areas where they were overspending. Most categories were the same across all three generations with just one exception. Where Gen Xers and baby boomers identified their monthly debt obligations as a drain to their finances, millennials detailed how it was food and dining out in addition to entertainment costs that inflated their monthly expenditures. And across the board, home expenses like mortgages and rent accounted for some of the biggest drains on Americans and their monthly budgets. At most, identified spending an average of more than 36 percent of their income on living costs, which could suggest they’re paying far too much on rent. 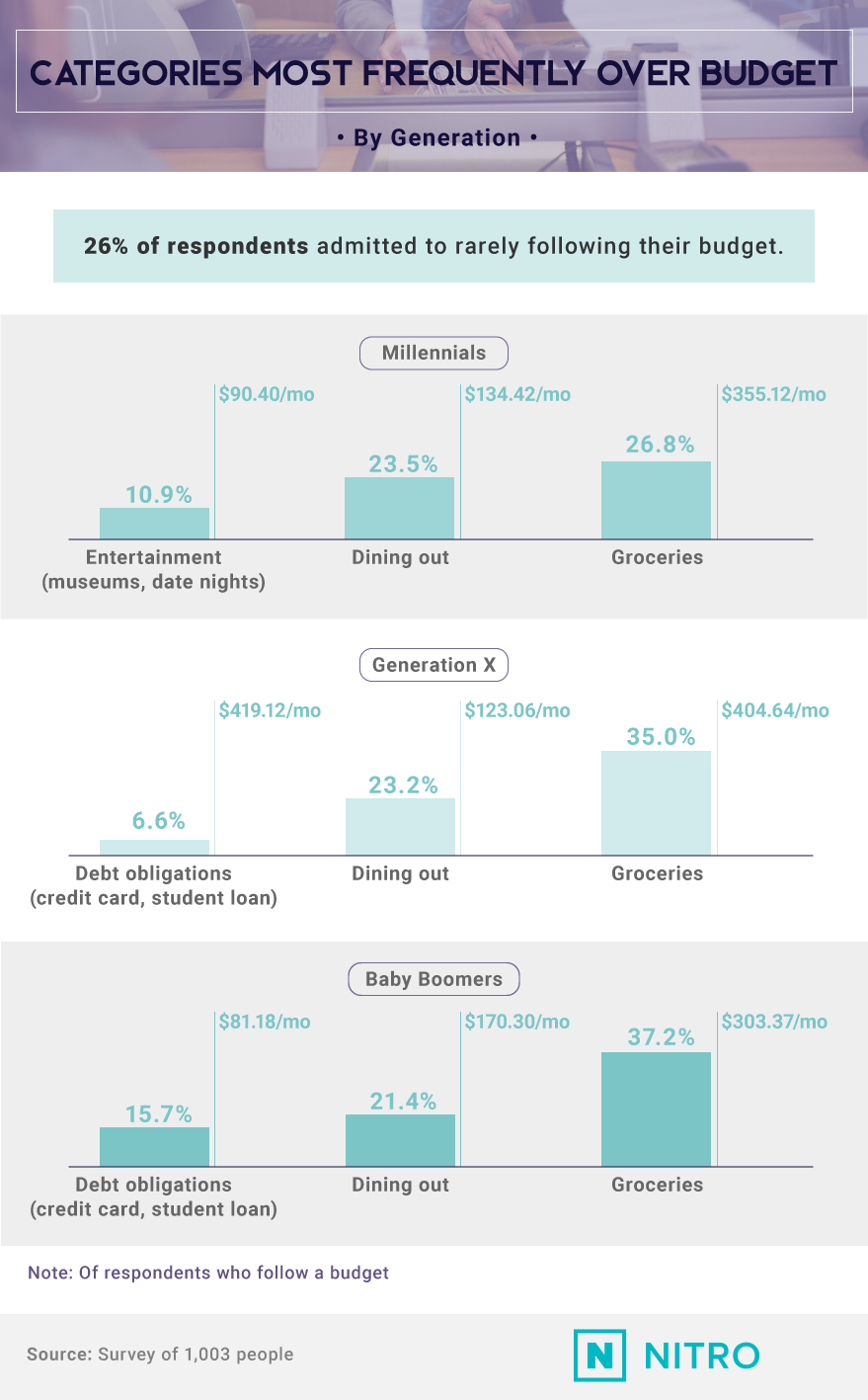 Eating out often takes the heat as one of the biggest strains on millennials’ budgets, but grocery shopping may go undetected as a cash-stealing culprit. Respondents spent far more money on groceries than they did eating out, and those expenses are typically far higher than necessary. 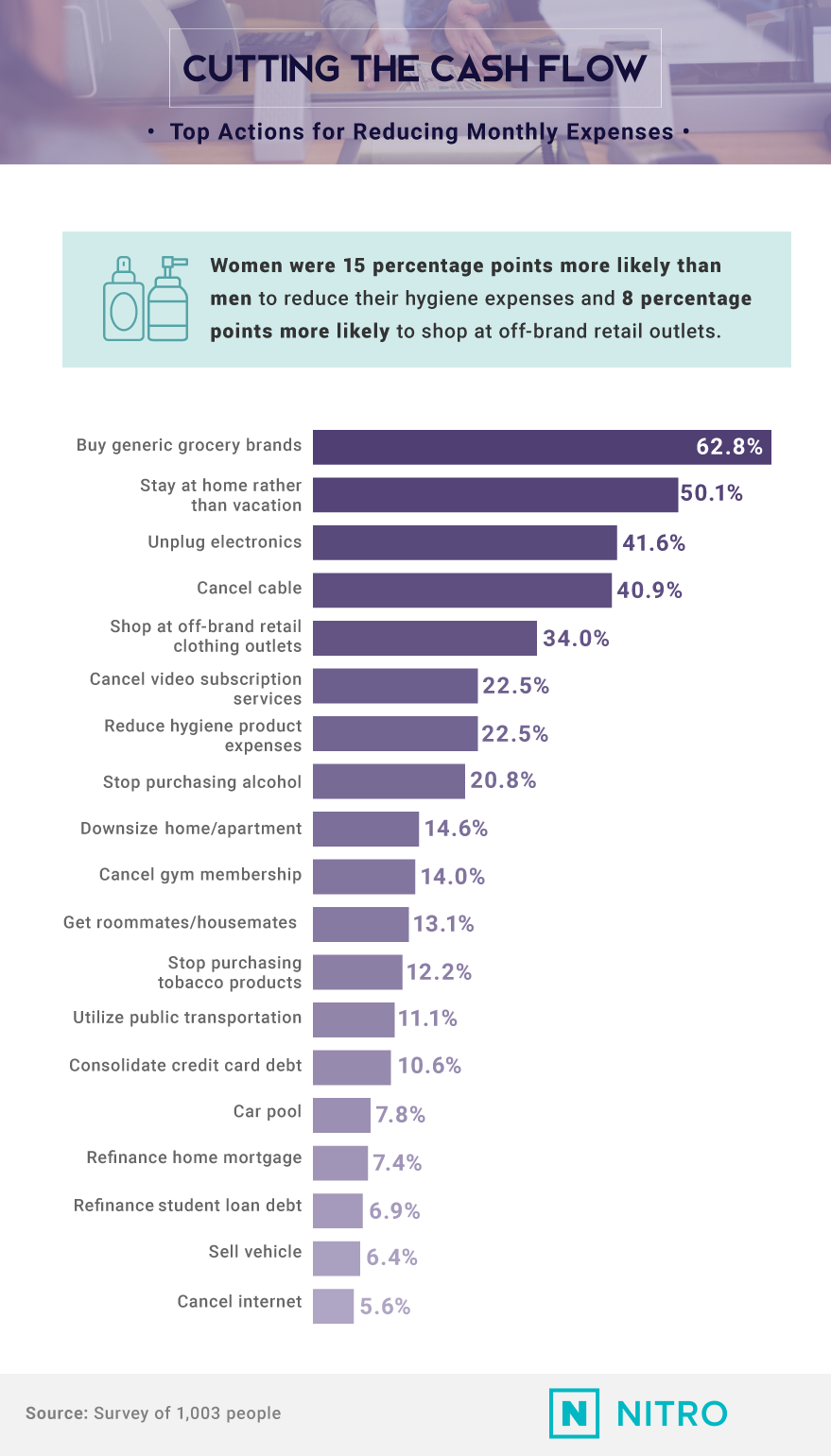 If you think you might be overspending on food and entertainment, you’re probably not alone. Buying generic grocery products was the most common action (63%) people took to reduce the strain of their monthly expenses. It may sound simple, but you could be paying double (or more) for brand names when the generic alternatives are virtually identical and sometimes even manufactured in the same facilities as their costly counterparts.

Another half opted to stay home rather than take a vacation, which doesn’t necessarily mean you have to cancel all your plans. Often referred to as a “staycation,” you can get all of the benefits of rest and relaxation by cutting out the stress and cost of a traditional travel itinerary.

You might also consider “cutting the cord” by unplugging electronic devices or canceling cable. The average family spends between $85 and $100 a month on cable and satellite programming, which can amount to over $1,000 a year. Reducing hygiene expenses, downsizing your home or apartment, and consolidating credit card debt with a loan were other popular solutions for cutting back on unnecessary spending. Taking out a loan to repay in conjunction with a healthy budget can also be a smart way to get your finances back on track.

Sixty percent of people admitted they were just making ends meet financially, and more than 3 in 4 were afraid their savings wouldn’t stretch very far if needed.

Eye on the Prize 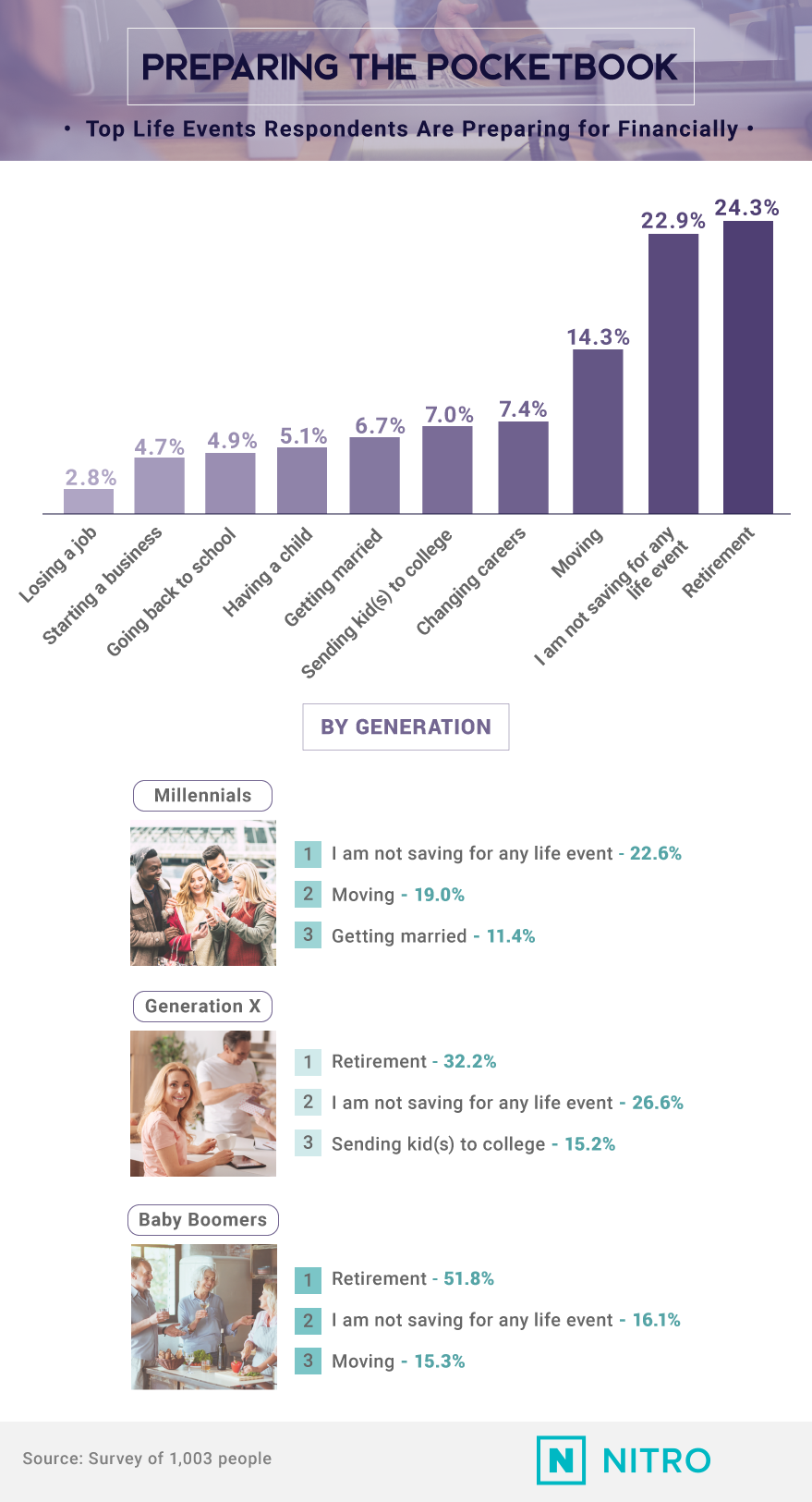 Making a strong effort to budget your finances, keep track of your income, and eliminate unnecessary expenses isn’t just about having an excess of cash on hand should an opportunity arise when you need it.

While establishing a healthy savings account can give you peace of mind, it’s the impact on your quality of life (now and in the future) that really cements the importance of building a budget.

While 23% of people said they weren’t saving for any particular life event, 24% were focused on preparing for retirement, and 14% were preparing for a move. Depending on the industry you work in (or want to work in), where you live may not be the best location for success. Of course, moving comes with a broad set of expenses and may require a serious amount of cash to make the transition. More than 7% of people also identified changing careers as their biggest motivation for budgeting, followed by sending their children to college (7%) and getting married (6%). 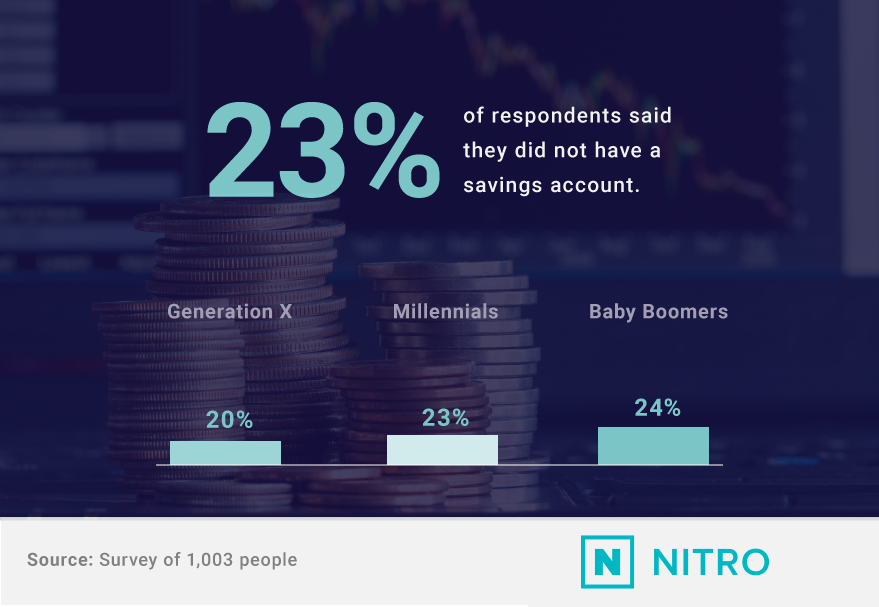 Just 23% of respondents said they didn’t currently have a savings account. If you’re diligent about monitoring your spending habits, you want to make sure you have somewhere to put the money you’re saving for whatever comes next in life. Experts say savings accounts help improve financial stability. The more visibility you have into your finances, the more control you’ll have over them. 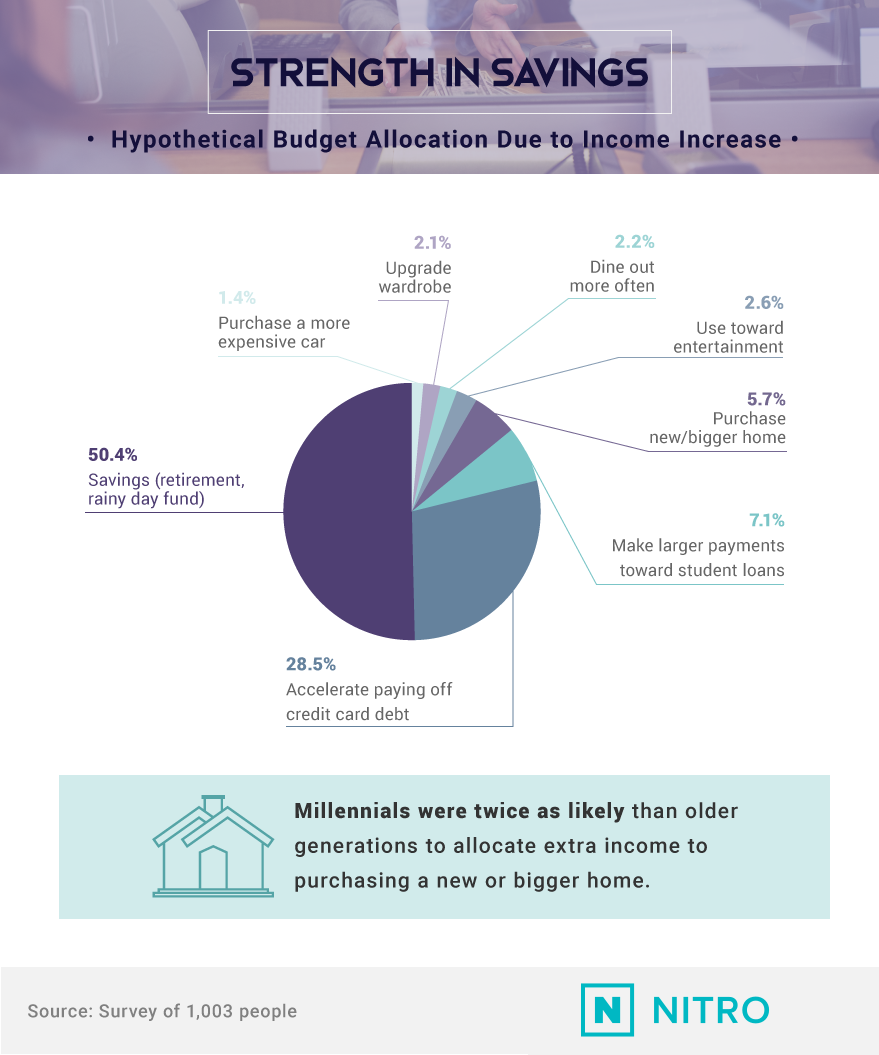 How would you work a new influx of cash into your existing budget allocation?

More than half of people would focus those extra funds on savings. Putting away for retirement, or making sure you’ve got the right amount of money set aside for an unforeseen emergency can help eliminate stress and allow you to plan accordingly. Nearly 29% of people would focus on accelerating paying off their debt if they got an income increase. The average American has thousands of dollars in debt, from over $67,000 when they’re younger than 35 to more than $34,000 by the time they’re over the age of 75. From student loans to credit card debt, those obligations can put a serious cramp in your future financial goals.

A Financial Future You Can Count On

You’ve probably heard establishing a budget will change your financial life. It’s a popular sentiment for a good reason. As we found, sometimes the most important part of building a budget isn’t keeping track of where your money goes – it’s building consistent habits around how and why you spend it. Most people admitted they were still overspending on things like groceries and eating out and knew they could do things like generic brands to help cut back.

At Nitro, our mission is to help put as much money back in your pocket as possible. With lower monthly payments on your student loans, you’ll have more cash for the things you really want. Whether you’re saving to buy your first house or want to start your own business, student loans should never hold you back. Visit us today to learn how much you could save by refinancing with one our preferred leading lenders.e.

For this study, we administered an online survey to 1,003 participants using Amazon’s Mechanical Turk. Participants were disqualified if they entered inconsistent data throughout any point of the survey or failed to answer an attention-check question properly. Older generations are defined as Gen Xers and baby boomers. Generation Z, the Silent Generation, and the Greatest Generation were excluded from generational breakdowns due to insufficient sample sizes. Survey results were weighted to the 2017 U.S. census for age and gender, and no statistical testing was conducted on claims made throughout the study.

The main limitation of this study is that respondents provided self-reported estimates for their average monthly income and average monthly spending per budget category. A common problem associated with self-reported data may include exaggeration, and we acknowledge that our sample may not be the most representative of the population from a financial standpoint.

Are your readers looking for more ways to save? The results of this study and all of the associated images are free to share for any use with a link to this page included within the article.