Are workers in search of money or meaning? Among academics and executives across the country, this essential question remains unresolved. And as millennials come to dominate the American workforce, the conflict between idealism and income seems more important than ever.


In one camp, experts emphasize office culture and creative freedom as the keys to employee engagement. If workers feel empowered to do meaningful work, these theorists argue, they’re unlikely to feel stifled in their roles. Additionally, recent studies indicate millennial professionals feel more drawn to noble causes than earlier generations. As they weigh job prospects, young workers are attracted to companies that value the “double bottom line”: profitability coupled with social purpose.


Others are more skeptical of this high-minded employment criteria. These cynics point out that paychecks should be an especially powerful incentive for millennials, many of whom are paying down sizeable student loans. Sure, some youthful idealists are looking to make a difference. But most Americans are just looking to make a living, right?


We decided to put each of these perspectives to the test, surveying more than 1,000 employees about what frustrates them in their current careers and what could entice them to take their talents elsewhere. Are dissatisfied employees tempted to leave to pursue their passions or simply to obtain better pay? On the other hand, how much cash could convince them to leave their dream jobs? For answers to these questions and more, keep reading. 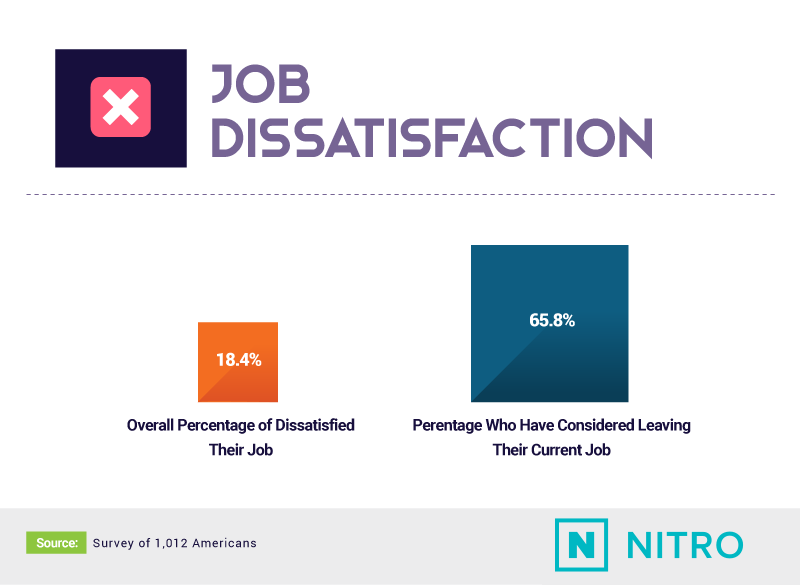 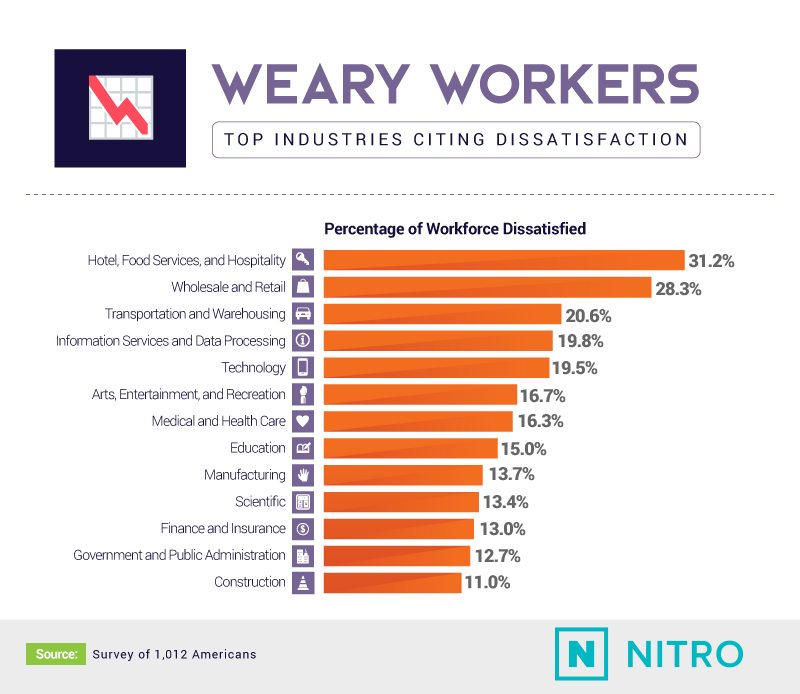 When we explored the dissatisfaction of workers in each field, we found service industries boasted the highest portion of frustrated employees. In the hotel and food service industry, nearly a third of workers identified as dissatisfied, as did a similar portion of retail and wholesale workers. This sentiment likely explains high rates of turnover in these fields, as dissatisfied workers seek better options.


The food service industry specifically includes many of America’s lowest-paying jobs, and meager compensation likely exacerbates worker irritation. Yet our data also indicate broad dissatisfaction in fields that might boast higher rates of pay, such as information services and data processing and technology. These findings are particularly interesting because of the acclaim many high-profile tech companies have earned for being great places to work (apparently, not all technology gigs include the perks of Silicon Valley).


In another unexpected turn, government and public administration workers had the lowest rates of dissatisfaction of any industry we studied. This would seem to contradict other recent research suggesting very low rates of professional engagement among government workers. 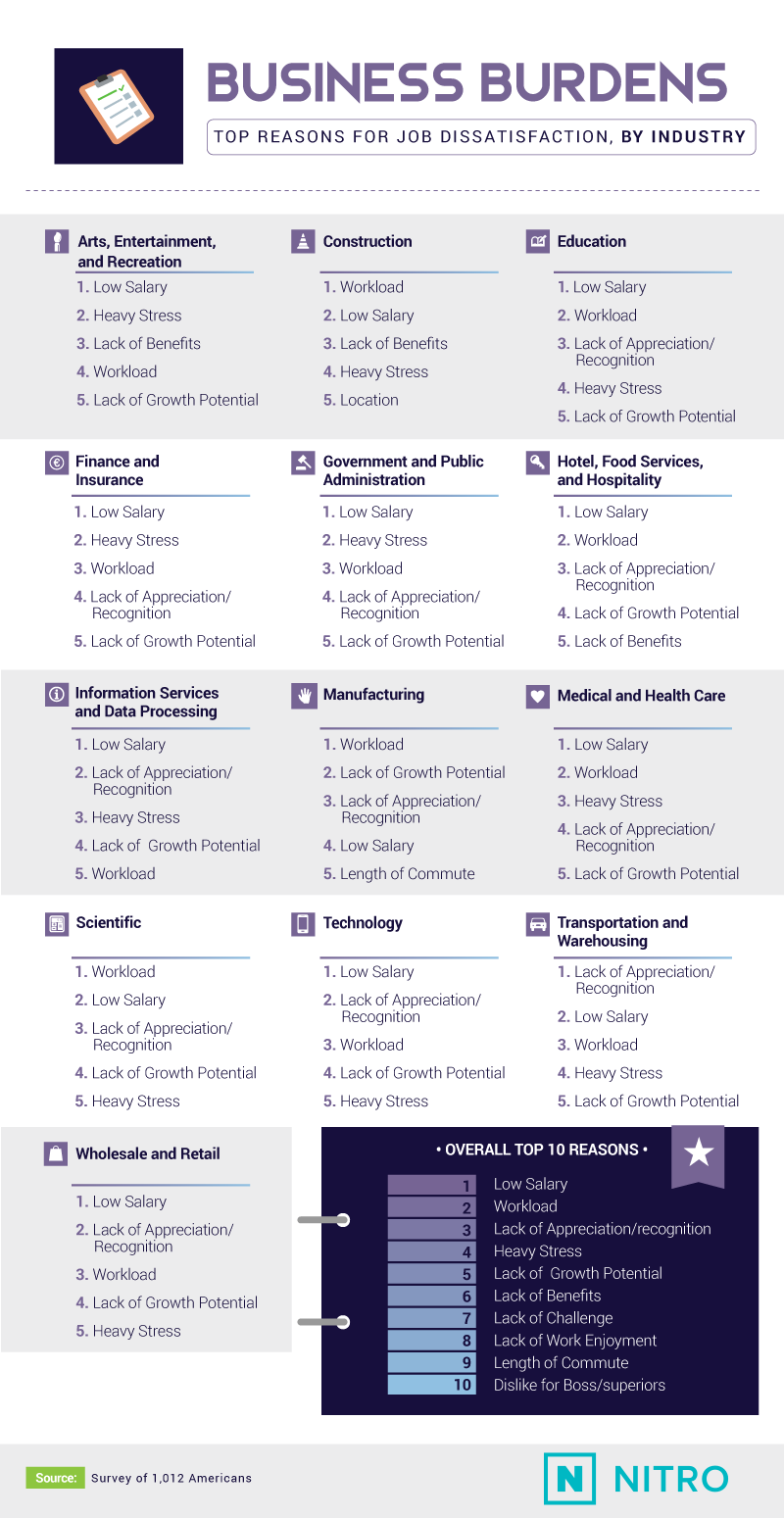 Pay may not be the only cause of employee frustration, but it sure accounts for a lot of their ire. A low salary was the most common cause of our respondents’ dissatisfaction with their jobs overall and the top reason for dissatisfaction in all but four industries. These exceptions included the construction, manufacturing, and scientific fields, where workload was the prevailing concern.


Conversely, transportation and warehousing workers cited a lack of appreciation as the top reason for job dissatisfaction. That sentiment could pose a challenge in filling trucking jobs in the future: The industry needs to add roughly 100,000 drivers in the coming years to meet the demand for their services. A lack of recognition also seemed to vex technology and information services workers, for whom it was the second-leading cause of job dissatisfaction. Retail and wholesale employees felt similarly bereft of positive reinforcement.


Interestingly, a lack of growth potential wasn’t a top driver of dissatisfaction in any industry except manufacturing. Experts have long emphasized room for growth as essential to employee morale, but our data suggest some immediate concerns may actually prove more crucial to most workers. 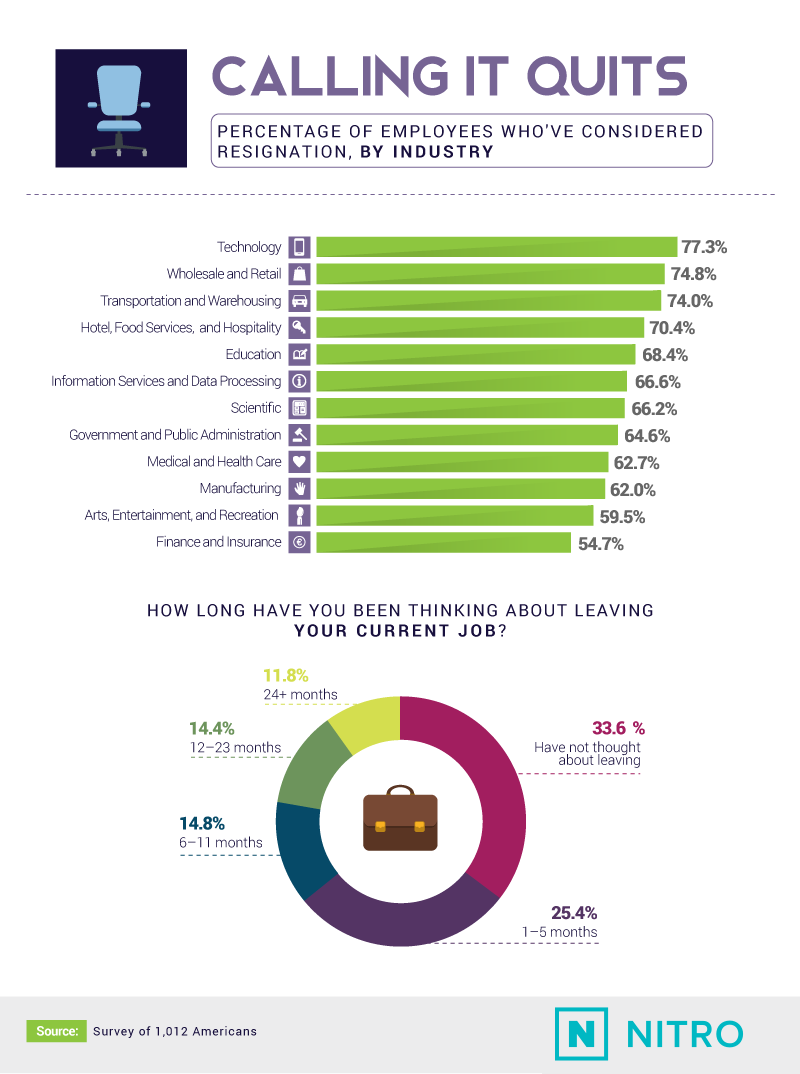 More than three-quarters of technology workers have contemplated leaving their jobs, the largest portion of any industry. This statistic might reflect an abundance of tempting alternatives: The tech industry has recently experienced a labor shortage, so many companies are vying for talent with attractive salaries. In several other fields, the vast majority of workers also weighed a career move. At least 70% of workers considered resigning in the retail and wholesale, transportation, and hotel and food service fields – industries with high dissatisfaction rates as noted earlier.


Nearly 40% of respondents considering leaving their current jobs hadn’t pondered the move long, weighing the option for five months or less. But a sizeable portion of workers spent years mulling over the prospect of quitting, including the nearly 12% who thought about it for two years or longer. Because thoughts about leaving are often accompanied by a drop in employee performance, it’s possible this extended ambivalence could be costing companies significantly in the long run. 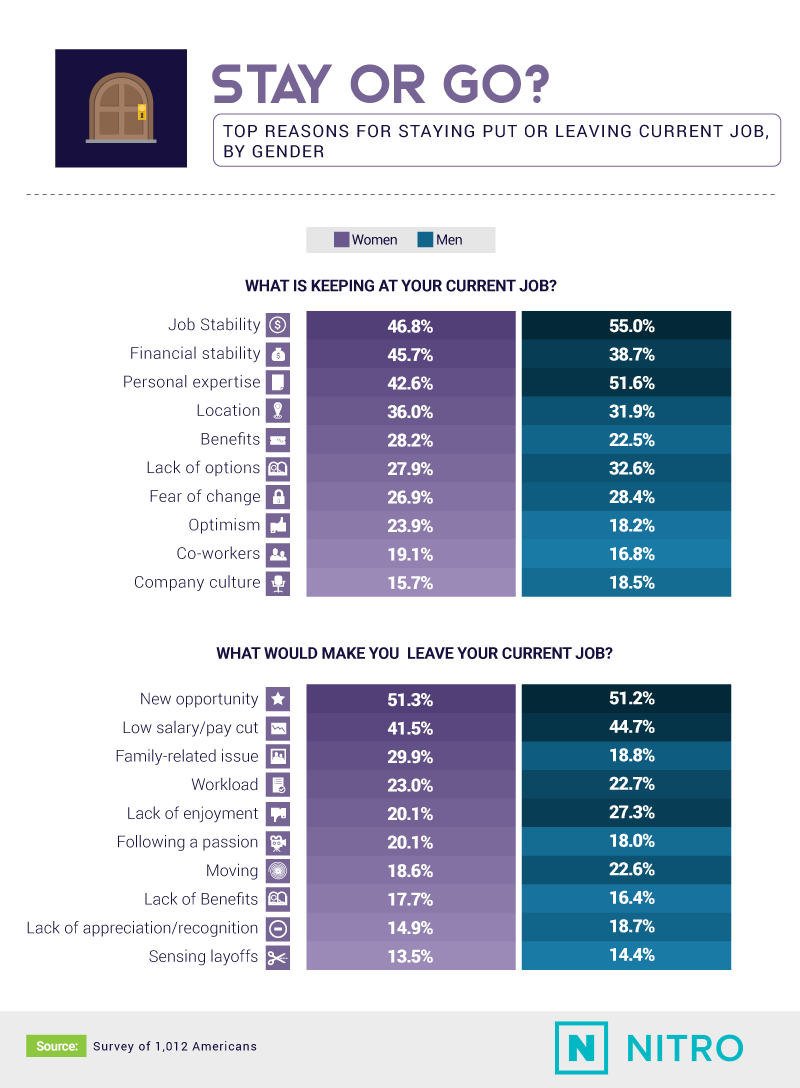 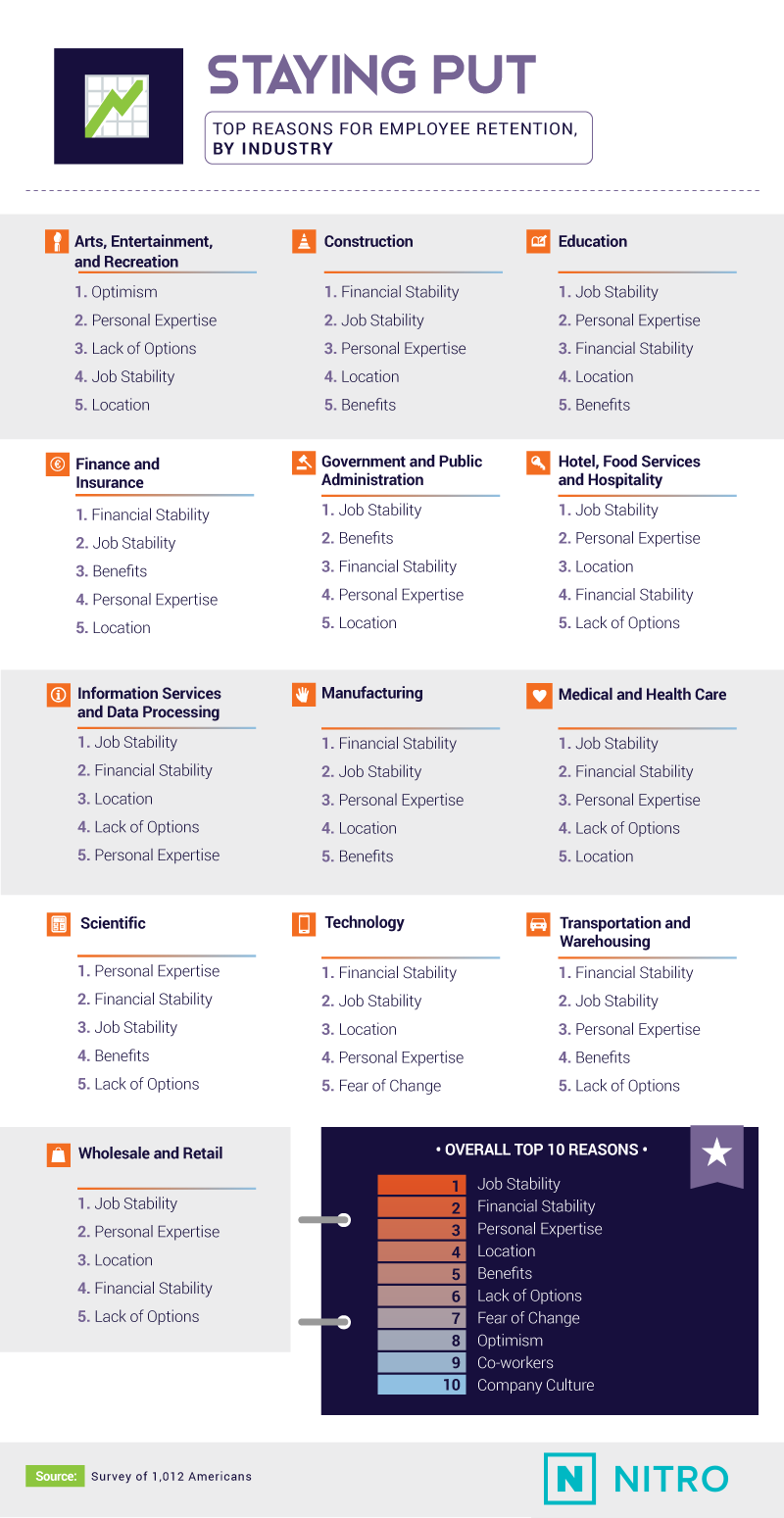 Across all fields, the most common factor keeping employees in place was job stability, followed closely by the financial stability they enjoyed because of their current salary. Interestingly, economists suggest these factors may matter less in a strong economy when a sense of broad prosperity encourages more workers to make career changes. Another common reason was an employee’s sense that their personal expertise might not apply in another professional context. Although many government programs seek to arm workers with new skills they need to pursue better employment, their results have been largely lackluster thus far.


Some results seemed to reflect specific industry realities. Among government employees, for example, benefits were a more important incentive for staying than in any other field; public sector benefits typically exceed private sector offerings. Among arts and entertainment professionals, a sense of optimism was the most common motive for remaining in their current role. Perhaps these workers maintain the hope that their work will reach a wider audience and that fame will entail greater acclaim and wealth.

Why They Make the Leap 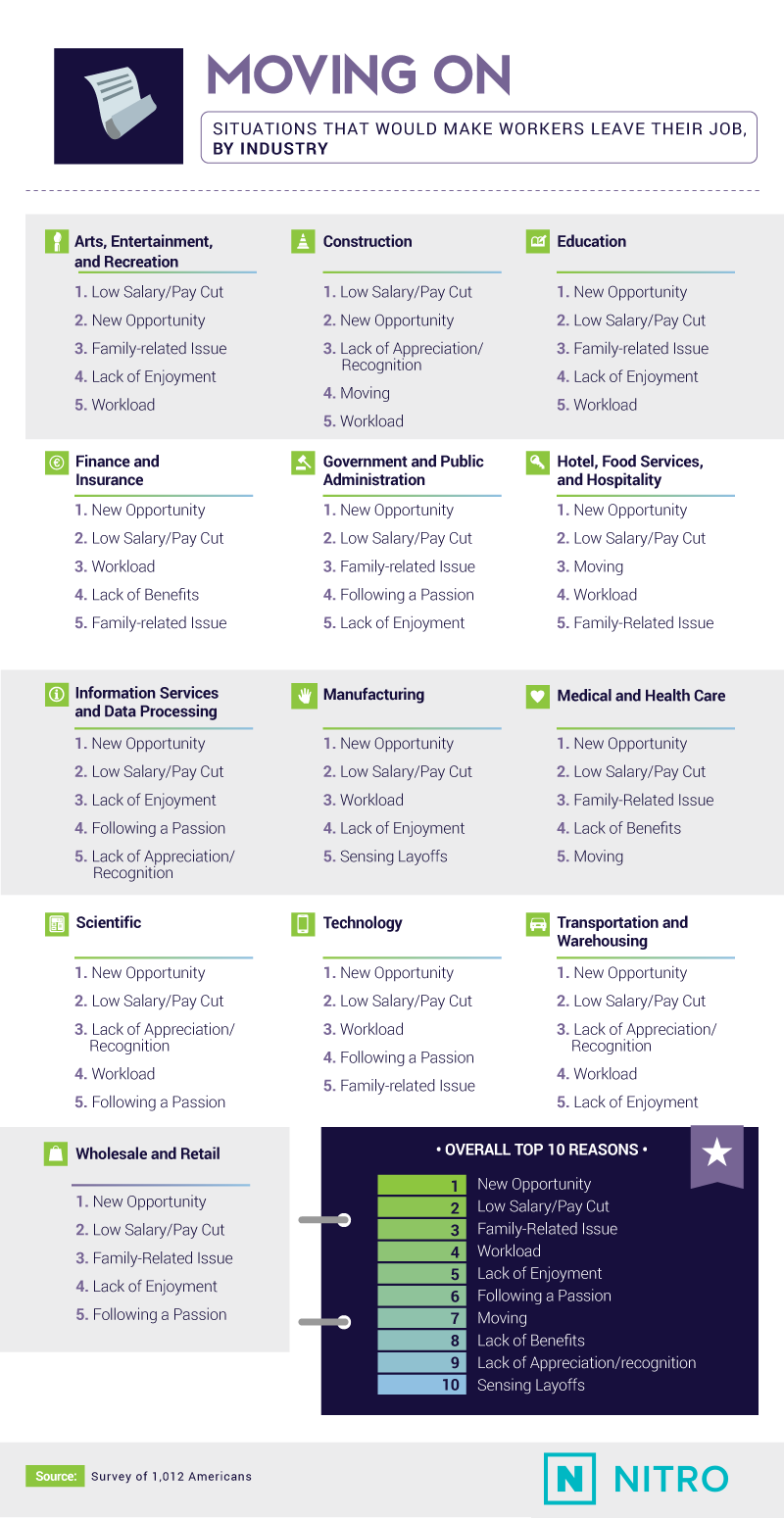 If so many employees contemplate quitting, what convinces someone to actually make that transition? In all but two industries, the most common reason was a new opportunity: When you’re offered a job elsewhere before leaving, you don’t risk a long period of unemployment. In construction and arts and entertainment, however, low wages or a pay cut were the top reasons for calling it quits. These salary concerns were the second-ranked reason for quitting in every other field as well, suggesting no company in any industry can pay less than market rates and avoid turnover.

Family-related challenges were another relatively common cause for quitting. Although the Family and Medical Leave Act ensures workers receive 12 weeks of unpaid leave in the case of family health emergencies, many workers must quit to care for relatives over a longer period. Workload challenges and a general lack of enjoyment rounded out the top five reasons employees quit overall. 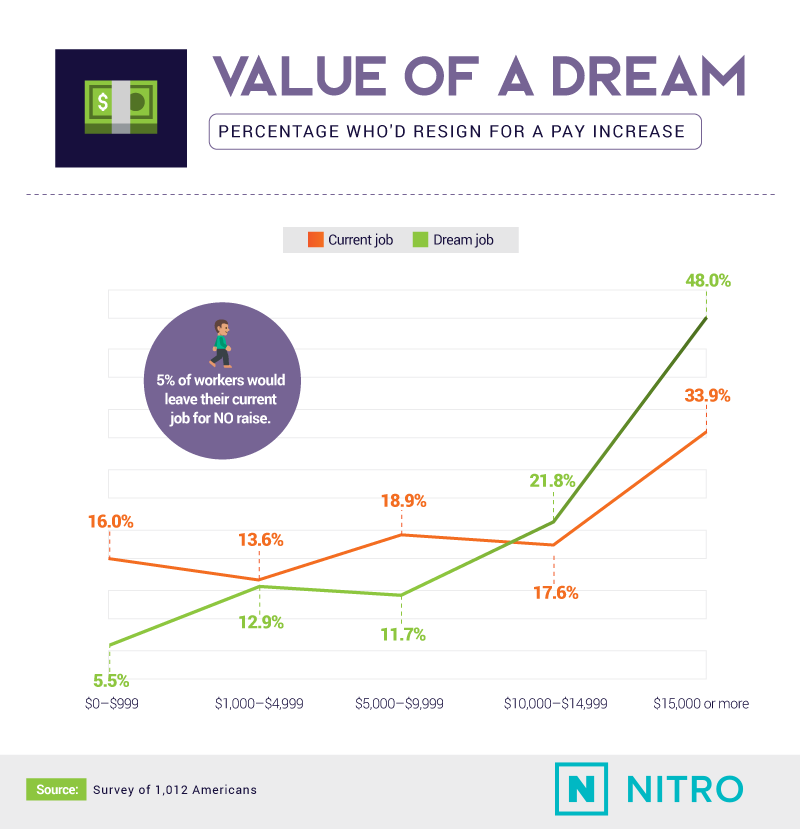 When we asked how much money would entice our respondents to leave their current role for another job, we found a surprising number of people would jump ship for a modest increase in salary. In fact, roughly two-thirds of respondents would switch gigs for a raise of less than $15,000, a finding that doesn’t bode well for companies hoping to inspire workforce loyalty. Then again, commitment to a single company is becoming a relic of a bygone employment era. Relative to their elders, millennials are particularly likely to change jobs frequently.


Even more surprising, however, was our respondents’ theoretical willingness to give up their dream job if they were offered more money to do something else. More than 30% of respondents said they would quit their dream job if they were offered less than $10,000 in additional annual salary. These data provide an interesting counterpoint to recent studies suggesting many professionals would take a deep pay cut to do meaningful work. Evidently, the monetary value of meaning works both ways: People will forgo it for the right price. 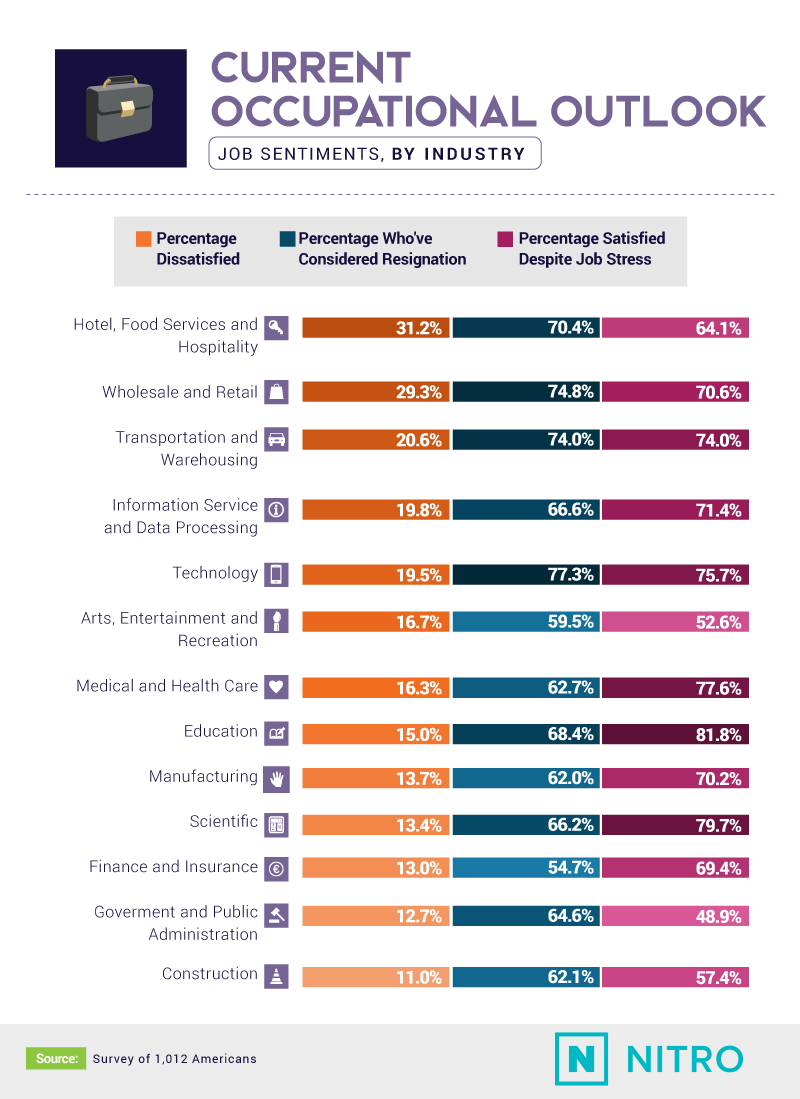 When we examined the sentiments of each industry more broadly, we found that contradictory sentiments can coexist in a single workforce. For example, two-thirds of information services and data processing professionals said they had considered quitting before, but nearly 78% also said they were satisfied despite the stresses of their job. Similarly, although roughly 77% of technology professionals said they’d thought about leaving their jobs, almost 70% said they were also satisfied.


These findings suggest pondering a job change doesn’t necessarily indicate some glaring issue in one’s present employment. They also demonstrate that in most industries, the vast majority of people are satisfied, despite the field’s particular shortcomings. Indeed, transportation and warehousing was the only industry in which less than half of workers felt satisfied despite job stress. Even in the hotel, food services, and hospitality field, which had the largest portion of dissatisfied workers, over 52% said they were content in their career.

Our findings suggest employees require some combination of meaningful work and reasonable compensation – and millennials aren’t the only ones using this dual criteria. But the right balance between these incentives is an entirely personal matter. Although workers across industries and age groups share some broad concerns, no single perk will inspire undying loyalty in all employees.


In your own search for work that is both purposeful and well paid, it’s important to remember that financial prudence will always produce more options. Smart saving, for example, will create more flexibility to change careers if you so choose. Similarly, taking on debt to finance your education could open up countless professional opportunities, a strong investment in the long run. But recognizing these opportunities often requires expert guidance.


That’s where Nitro can help transform your financial strategy with relevant advice at any stage of your education and career. From eliminating debt to saving for major purchases, we’ll help you prepare for everything you have planned – and everything you don’t.

We collected responses from 1,012 Americans from Amazon’s Mechanical Turk. 54% of participants were female, and 46% were male. Participants ranged in age from 18 to 78 with a mean of 35.6 and a standard deviation of 10.4. Participants were excluded if they never had a job or were clearly not paying attention (e.g., failed attention check question or entered obviously inconsistent data). We weighted the data to the 2017 BLS data for age and gender of employed Americans. No statistical testing was performed.

For assets that include industry breakdowns, only industries with more than 25 respondents were included in our analysis.

The data we are presenting rely on self-reporting. There are many issues with self-reported data. These issues include but are not limited to: selective memory, telescoping, attribution, and exaggeration.

Feel free to share our project with your own audience for noncommercial purposes. When you do, we simply ask that you provide a link back to this page to attribute our team appropriately. We love our jobs, but getting credit makes our work even more satisfying.