Experts suggest there are five important paths all young people take to adulthood: finishing school, moving out, getting a stable job, getting married, and becoming parents.

You probably don’t have to look very far, though, to find young people who’ve put on hold one or more of these transitions to independence. The idea of what constitutes a stable job is changing, marriage rates are down, more and more millennials are putting off having kids, and Americans collectively owe an estimated $1.4 trillion in student loan debt.

So what’s really holding young adults back from checking more milestones off their list even though they want to?

To find out, we took a close look at one transition in particular: leaving home. By analyzing census data, we determined how many young adults still lived with their parents, which areas and states had the highest percentages of young people staying at home, and what their primary reasons for staying were. Continue reading to learn more.

In the last 20 years, the number of young adults aged 18 to 34 living at home with their parents has increased by nearly 19%.

While the Great Recession is often attributed to why young people have stayed home longer than previous generations, the number of young people staying home actually began to rise substantially starting in 2005 and peaked in 2012 – three years after the recession ended.

Considering nearly 1 in 3 young adults still live at home with their parents today (more than those living with a spouse), this trend may say more about the future of the American economy than about the current economic climate.

Let’s take a closer look at which states have the greatest number of at-home young adults and how the housing market may be influencing their decision to stay put.

Young adults looking to get out of their parents’ home typically have two options: rent or buy their own. However, the cost of doing both continues to rise across the U.S.

Today, home prices, once considered a staple of the American dream, are rising twice as fast as income growth. The cost of renting is also rising at the fastest pace in nearly two years. The median rent in the U.S. today is $1,445, an increase of 2.8% since 2017. For some young people, this can make finding affordable housing more difficult than anticipated.

According to our analysis, the number of young adults living at home was highest in New Jersey, California, and New York. In New Jersey, property tax rates are the highest in the country. In 2016, the average homeowner paid $8,500 in property taxes, a 2.4% increase over 2015. Additionally, California and New York are among the states with the highest costs of living.

States where young adults are more likely to be found living on their own? North Dakota, South Dakota, Wyoming, and Iowa had the smallest number of at-home young adults nationwide.

Young adults increasingly prefer the energy of urban living to more rural or regions. When considering factors like walkability and public transportation, it’s easy to see why some cities are so appealing that young people are willing to go above and beyond to afford the sometimes-exorbitant costs of living.

While some metropolitan areas including El Centro, California; East Stroudsburg, Pennsylvania; and Barnstable, Massachusetts, had the greatest number of young adults still living at home, other parts of the country may be more realistic for young adults looking to move out.

Metropolitan areas including Fargo, North Dakota; Mankato, Minneapolis; and College Station, Texas, had the lowest average number of young adults still living with their parents. Fargo, especially, ranks as one of the best places in America to live as a result of its strong job market, booming tech culture, and cultural diversity. Living alone in big cities like Atlantic City, New Jersey, might not be for everyone – but there are options besides urban centers.

More Than a Money Matter

To learn more about the reasons young adults stay home with their parents rather than move out, we polled the very people living under their parents’ roof.

While a majority of people cited an average age of 29 as the oldest acceptable for young adults to be living at home, many factors can influence postponing moving out. For nearly 88% of participants, saving money was a key element in their decision to stay home. Another 59% couldn’t afford rent, and for 43% of people, the weight of student loans made it unrealistic to consider moving out.

Additionally, more than 1 in 4 people said they were helping their parents financially, and over 1 in 3 admitted they were still trying to figure out life. For 32%, there was simply no pressure to get out. 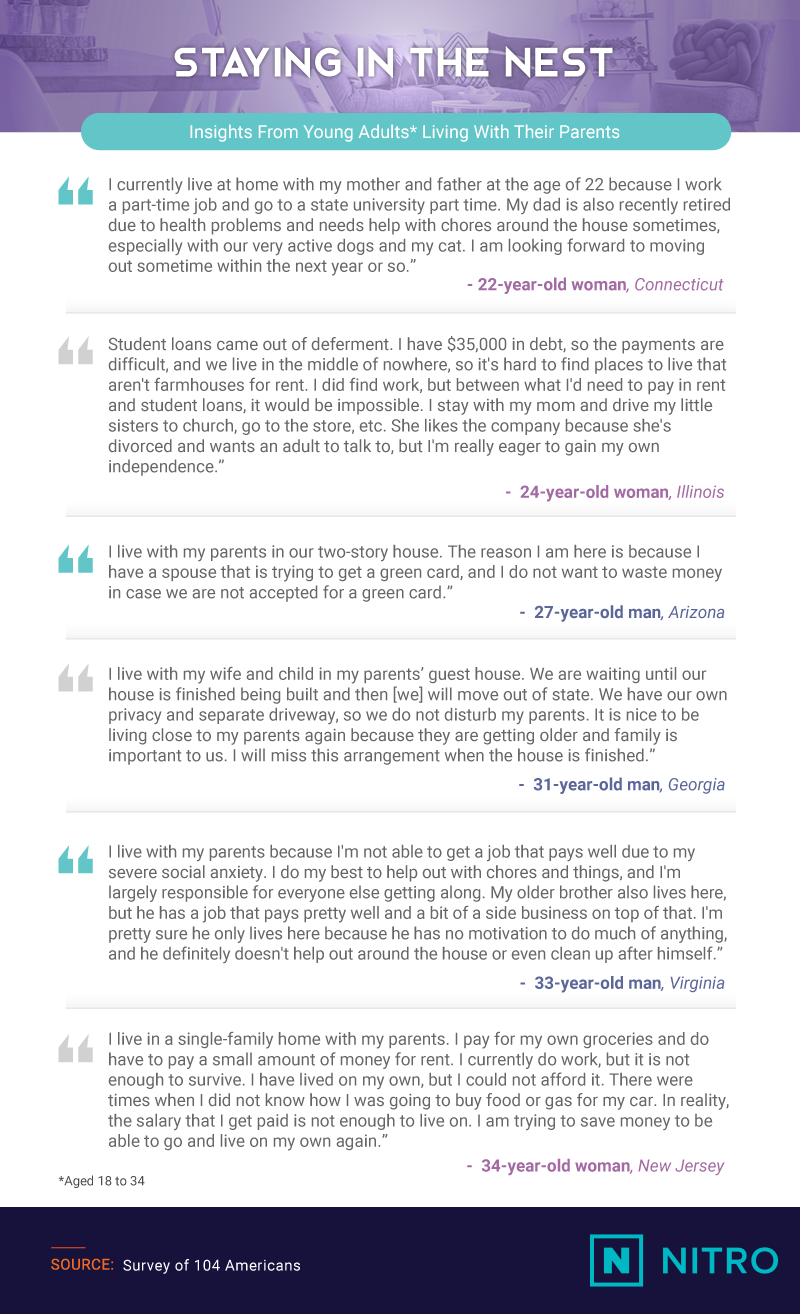 Of course, there’s much more to why people choose to stay home with their parents – and finances are just the beginning of it. It’s plain to see, no two reasons are exactly the same.

A 22-year-old woman from Connecticut said she stayed home to help her recently retired father around the house with basic chores and maintenance. A 27-year-old man from Arizona said he lived with his parents while his spouse applied for a green card, and a 33-year-old man from Virginia said he was currently unemployed as a result of his severe social anxiety.

What makes young adults today feel accomplished or independent may not be the same for generations past. While major milestones like getting married and having kids are often designated as checkpoints to adulthood, more and more young people are choosing different paths. More young adults may be living at home (and taking even longer to move out), but that doesn’t mean they don’t want to be homeowners when the time is right for them and their families.

At Nitro, our goal is to help you take control of your financial future. The average student loan debt in America is over $37,000 – and that money could cover a down payment on a home, a new car, or dream wedding. Refinancing could help change your life. By comparing rates from leading lenders across the country, you could save thousands of dollars on your student loan debt. Ready to make a change? Visit Nitro to learn more.

Our team gathered data from the U.S. Census Bureau’s American FactFinder using both Historical Living Arrangement of Adults and American Community Survey five-year estimates. To determine state and metropolitan statistical area (MSA) rankings, we calculated the number of young adults (18 to 34 years old) currently living with their parents per 10,000 residents. Additionally, we surveyed 100 people from Amazon’s Mechanical Turk. 75% of participants were millennials, and 64% of those respondents resided at their parents’ homes.

The survey data we are presenting rely on self-reporting. There are many issues with self-reported data. These issues include but are not limited to, selective memory, telescoping, attribution, and exaggeration.

Feel like you’ve now got a different perspective of young people living at home? Feel free to share this study with your readers for any noncommercial use. Just ensure a link back to this page so that they can see our findings in their entirety and our contributors earn credit for their work.