Have you ever driven past a billboard for a massive lottery jackpot or seen a contest promising a hefty cash prize and wondered how being rich might change your life?

You probably wouldn’t have to work a traditional job, and you’d certainly have more freedom for your passions. Maybe you’d pay off your student loans, work less, and travel more. While money can’t buy happiness outright, a sudden influx of it could certainly make you happier.

So maybe it’s easy to look at wealthy people and write off their lifestyle as just another perk of their bank accounts – but what if those routines helped people become financially secure in the first place? Can the advice of older and more successful people be directed towards Millennials to help them on their journey to success? To find out, we surveyed over 1,000 people about their perceived and actual levels of financial security and habits. Read on as we explore the connection between everyday routines and better finances.

Virtually everyone has a different definition of what it means to be well-off. Whether it means having a certain net income or being able to afford a particular lifestyle without worry, wealth can be pretty subjective. To help establish a baseline for financial security throughout this survey, we asked respondents to participate in the Financial Capability Scale developed by the Center for Financial Security and the Annie E. Casey Foundation.

Even though a majority of people had personal budgets and hadn’t been charged with a late fee in the past two months, it was their overall spending and financial goals that stopped most people from earning a higher score on their money matters. Less than 28% of people were very confident they could meet a personal financial goal set today, and nearly 1 in 3 admitted to spending more than their total income in the last month. 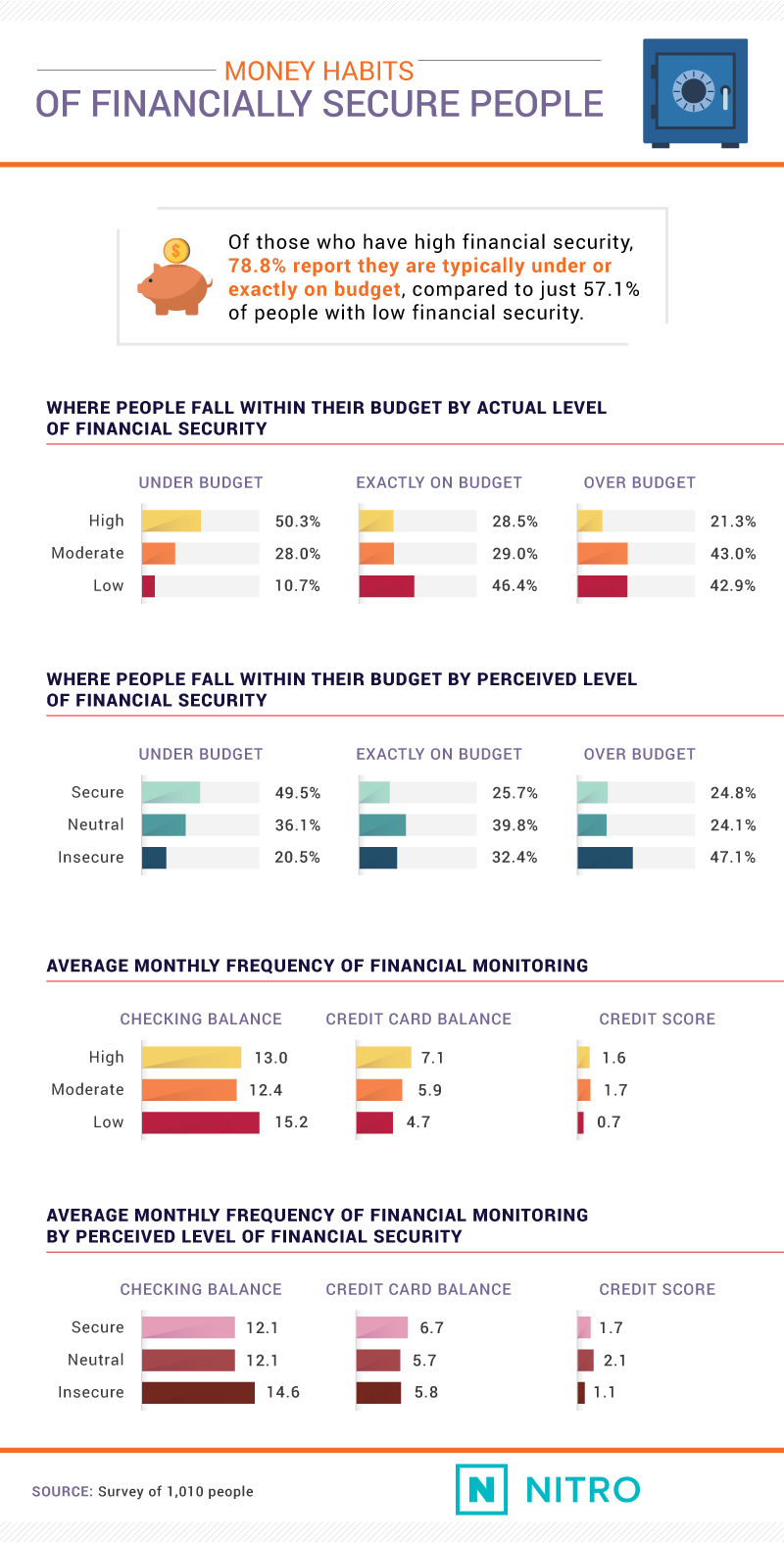 It’s important to recognize that earning an above-average income doesn’t mean much if you don’t develop proper money-management habits. Financial experts agree that it’s typically a cycle of debt that keeps people from feeling confident about their finances.

Getting out of that trap isn’t impossible, and sometimes, the best thing you can do for your financial wellness is the most obvious: Establish a budget and stick to it. However, it’s about much more than saving and spending. Keeping a close eye on the money you have coming in and going out means you’ll have a better chance of reaching your money goals, and you won’t have to worry nearly as much about unforeseen expenses.

Clean Up Your Financial Act 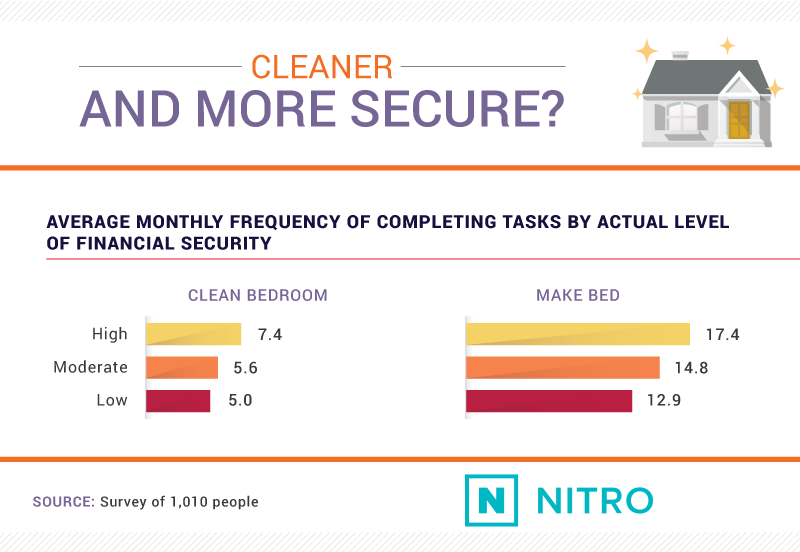 Good cleaning habits may not come naturally to everyone, but there are plenty of perks that come with picking things up around the house every day. Not only will keeping things clean make you happier but studies also show a tidy space will make you more likely to work out and can help generate feelings of accomplishment and productivity.

People who had high financial security reported cleaning their bedroom and making their bed more often than those with moderate or low security. Some experts go so far as to call making your bed a “keystone habit,” meaning that doing it as a part of your morning routine will help you continue to be productive throughout the day. The same philosophy can apply to your finances – think about creating a budget and using it to track all of your incoming and outgoing funds. 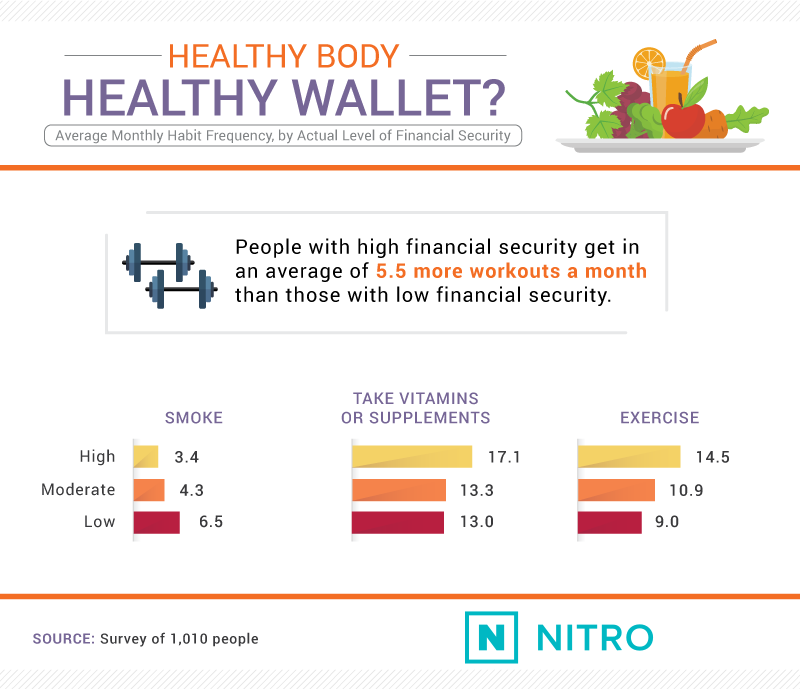 Just like making your bed in the morning, fitting a workout into your routine can feel like a chore, but you’re going to get way more out of your time than just burning a few extra calories. Studies show exercising can boost your energy levels, fight off stress, and fend off other mental and physical health concerns.

Healthy habits could also benefit your wallet. People with high financial security were more likely to exercise and take vitamins and supplements but were less likely to smoke. 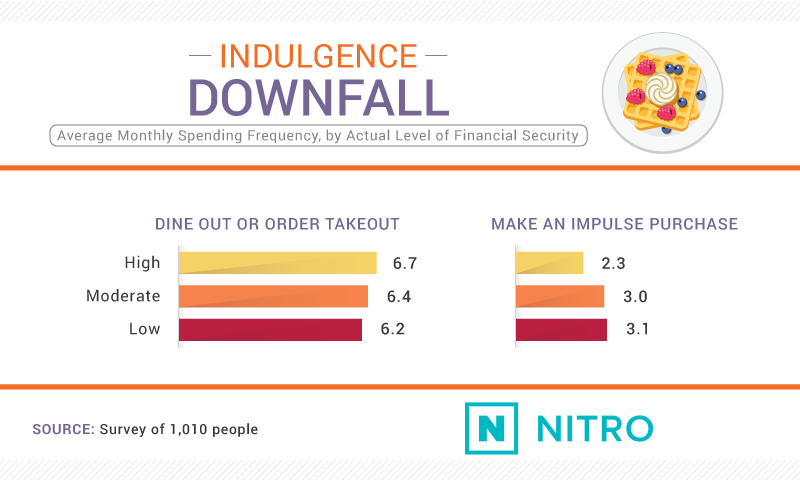 In 2015, Americans spent more money eating out than they did on groceries for the first time in history. And while more and more people aren’t cooking for themselves, the financial strain of eating out could cause serious hardship. Even if you only eat out at lunch during the workweek, the average meal costs $10, equating to around $2,500 a year per person. Cooking a meal at home would cost just half of that. In 2016, one couple realized they’d racked up over $30,000 in credit card debt from restaurants and food-ordering services. 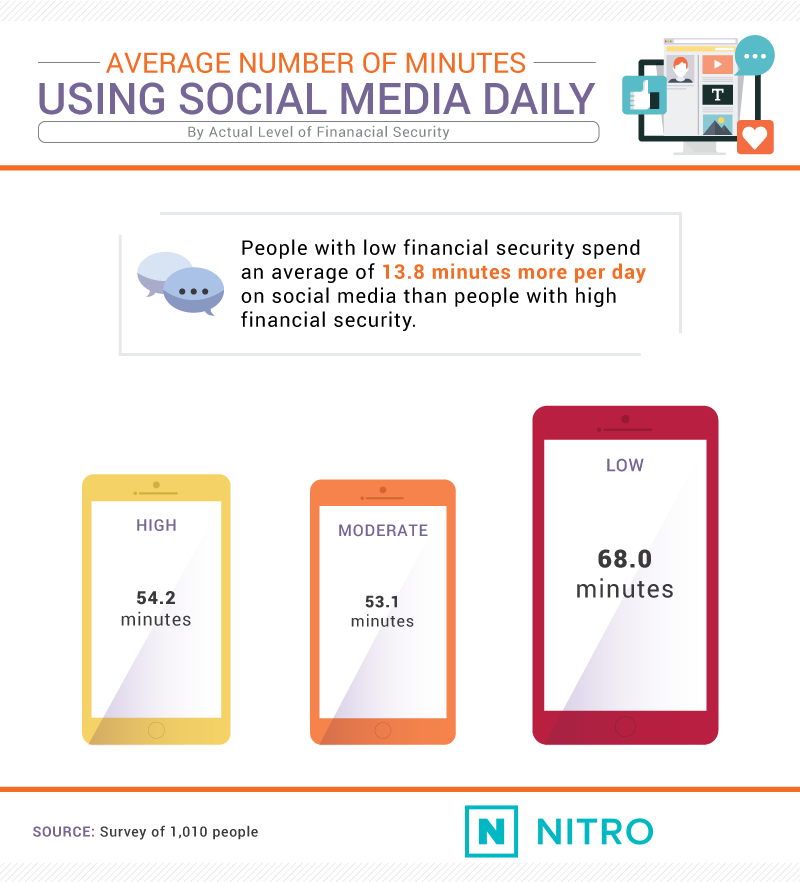 It’s important to remember that it takes time to earn money. Wealth doesn’t come quickly for most people, and the amount of time you spend working and developing habits all help contribute to the pace at which you reach your financial goals.

Considering the focus you’ll need to maximize your efforts, it’s also important to think of what’s draining your time. As it happens, one of the biggest roadblocks to success could be social media. The average person spends nearly two hours a day looking at apps like Facebook and Instagram, and these social media platforms could cost you both productivity and financial freedom.

Money On the Mind

Every person’s financial journey is different. While there’s no one path to finding financial security, certain factors may positively or negatively impact your economic status.

The same way your spending and saving habits can affect your financial stability, the way you prioritize concerns may help you make better future financial decisions. Across three generations, people with high financial security had one thing on their mind: having enough money for retirement. No matter how far off it might feel, most financial experts recommend that the average person start saving for retirement in his or her 20s.

People of all ages with low financial security also had similar concerns: debt and making ends meet. The average household has roughly $49,000 in student loan debt, which can cost hundreds of dollars a month in loan payments. Without an option to overcome these massive obligations early in life, saving or investing may seem nearly impossible.

Setting Up for Success

Most people spend an overwhelming amount of time worrying about money, but it’s important to realize that financial security is more than just the money in your bank account. It’s our habits in life – from how often we make our beds in the morning to preparing meals at home – that may help instill quality saving and spending behaviors.

If student loan debt is keeping you from thinking about anything else, Nitro is here to help. Too many factors can impact your financial future, but affording student loan payments shouldn’t be one of them. By helping you refinance your loans with our network of preferred lenders, Nitro can help you save thousands of dollars. It only takes a few minutes to calculate your savings, and the results could have you thinking about saving and spending in a new light. Visit us at NitroCollege.com to learn more.

Using Amazon’s Mechanical Turk, we surveyed 1,010 people. Respondents were 50% male and 50% female. The average age of respondents was 36.3 with a standard deviation of 12.1.

To get a consistent measure for financial security, respondents were tested using the Financial Capability Scale developed by the Center for Financial Security and the Annie E. Casey Foundation. The scale consisted of six questions, with the answers to each question carrying a specific point value. Based on the six questions, respondents were given a score between 0 and 8, which represented their financial capability. Those who scored lower on the scale were deemed less financially capable, and those on the higher end were deemed more financially capable.

The scores were then combined into three groups, which are as follows:

When asked how they would rate their personal financial security, respondents were given the following options:

These were then consolidated into three groups in our visualization of the data: secure, neutral, and insecure.

Parts of this project concern the habits that potentially correlate with financial security. Survey respondents were asked how many times they did certain activities in a month. Those responses were used to create monthly average frequencies for a number of habits.

When looking at the average daily time spent on social media by respondents, we accounted for outliers that skewed the data by calculating the mean of all the data and the standard deviation. Then, the standard deviation was multiplied by two and added to the mean. Any data points above this sum were excluded from our visualization.

Parts of this project look at generational breakdowns. The sample sizes for each generation are as follows:

In the parts of this project where generational breakdowns are presented, respondents who identified as a part of the Silent Generation or Generation Z were excluded due to low numbers of respondents in those groups.

The data used in this project are based on self-reporting. Self-reported data have some issues associated with it, including selective memory, telescoping, attribution, and exaggeration. This should be considered when reviewing the data.

We ran no statistical tests on the data, so the assertions within this project are based solely on the means. This content should be treated simply as exploration, and more rigorous future research should be performed.

Know someone who’s financial and lifestyle habits could use some work? You can share this study for any noncommercial use. We only ask that you link back to this page so that other readers can see all of our findings. Plus, it helps our contributors earn credit for their work.