Does the Givling App Actually Work? Here's Our Review

Play a trivia game and get your student loans paid off. It sounds too good to be true, right? But for some people, this actually happened.

Yeah, we know—we didn’t believe it either. So we did a deep-dive into Givling. The fast take: Yes, it can help you pay off your student loans, but it's not a magic bullet. You'll need some time and patience to reach your own own payoff.

If you'd rather skim, you can jump to these sections:

Givling is an iTunes and Android app that lets you play a trivia game on your phone, win cash, and—theoretically—get your student loans paid off.

Givling was founded by Lisbeth Pratt, a Stanford University graduate who managed to earn her degree without racking up debt—but was later forced to declare bankruptcy when she was defrauded by her business manager.

It was a long, tough climb to get herself out of bankruptcy, but Pratt managed it. Even so, she was moved and upset when she saw that Congress had passed a law that made it illegal for student borrowers to declare bankruptcy.

The inherent unfairness of a system that would force college graduates into financial ruin with no way out—even bankruptcy—inspired her to found Givling.

How does it work?

Believe it or not, you don’t actually need to have student loans to play Givling’s trivia game—you can also win money from a weekly pot. That money can be used for whatever you like.

You also don’t have to play the trivia game to get your student loans paid off—there are other ways to compete for that, too.

There are two types of users on Givling: players and borrowers. Here’s how the app works for both.

When you join, you’re randomly assigned to a team of three. Together, you answer a series of yes-or-no trivia questions to earn points.

You answer questions until you get three wrong answers—or until the questions on that round run out (a round has 30 questions). The more questions you answer right, the more points you earn.

If you’re on the highest-scoring team at the end of a week, you get to split the cash award three ways. You don’t need to have student loan debt to play or to earn money with the app—the trivia game is open to everyone.

Student loan refinancing rates now as low as 2.43%, click below to start saving.

Every 24 hours, you get two free rounds of play. If you want to play more, it’s 50 cents a game—plus a 30-cent PayPal or Braintree fee.

If you want Givling to pay off your loan, you get in the Givling Queue.

Whether you get onto the funding queue is determined, in large part, by how many queue points you have. (So really, in the broadest sense, that makes Givling a point-collecting app rather than a trivia app.)

How does Givling make money?

Givling gives about 45% of its earnings to pay off loans for its users, 45% goes to the weekly winnings for trivia players, and 10% goes to run the app.

Here’s how Givling makes that money:

How can you earn more points on Givling?

Paying the trivia game and buying coins aren't the only ways to get points on Givling. The app wants to encourage you to watch ads and interact with its sponsors, and it will reward you lavishly with points for doing so.

Here's a breakdown of the ways you can earn points on Givling: 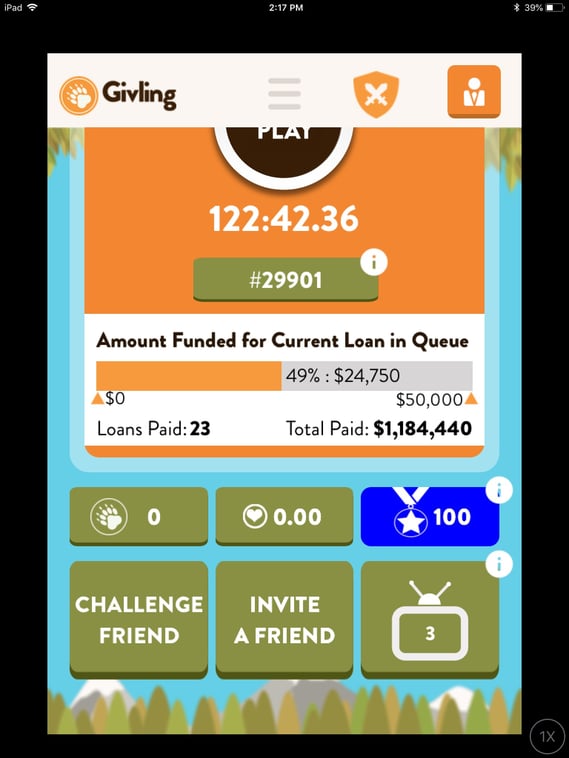 That’s the number of ads you’re allowed to watch in an hour (usually it’s three). You can earn from 1 to 500 points for watching an ad—you get to spin a wheel at the end of each ad to determine how many points you get.

Beyond those, there are other ways to earn points through Givling. Those include:

As your queue points rise, so do your chances of having your student loan put in the Live Funding Queue. Once it’s there, it’s on track to being paid off.

How much money can you make?

There’s a weekly cash prize available for trivia players. Your team’s points are added up throughout the week, and the top-scoring team at the end of the week splits the prize money evenly.

This award isn’t chump change, either. The amount fluctuates, but as of this writing it’s a whopping $33,612.

How to get started with Givling

It’s easy enough to get started. We’ll walk you through it. 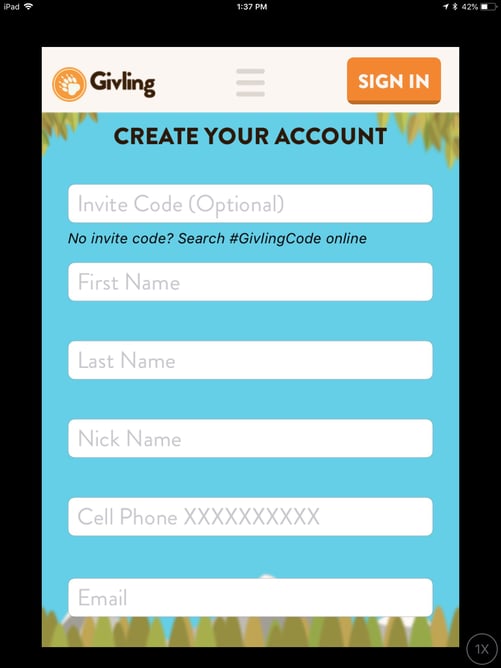 Givling will ask you some basic info about who you are and your contact info. Note that they also ask for a Givling invite code.

If you don’t have one, it’s easy enough to search for “#givlingcode” on Google; and there is in fact an entire Twitter account dedicated to sharing Givling invite codes far and wide. Here’s the link. Go nuts.

2. Get to the Free Play screen 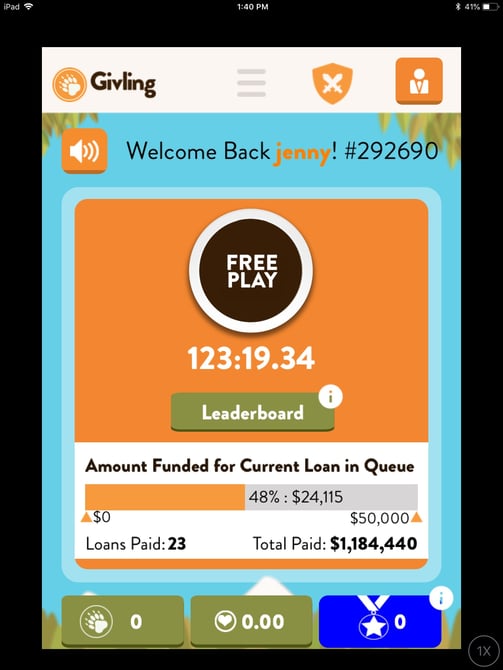 The screen also tells you how much money has been raised to fund the current loan being paid off in the queue ($24,115 in this screen), the total loans paid as of this date, and the total amount paid. This amount changes daily.

The “Leaderboard” button shows you who’s currently on the top team: 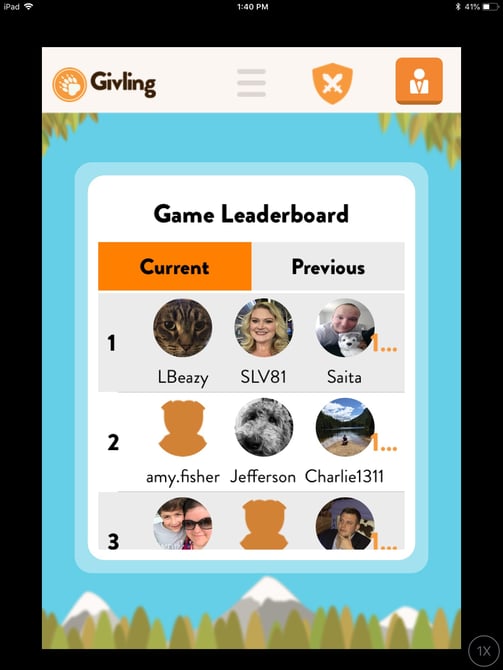 A flashing banner will appear initially when you sign in that shows you the total amount in the pot that you’re competing for in the trivia game.

Click on the “Free Play” button, and you’ll get matched randomly with two other players to start playing trivia.

Each trivia round includes 30 questions. Here’s an example: 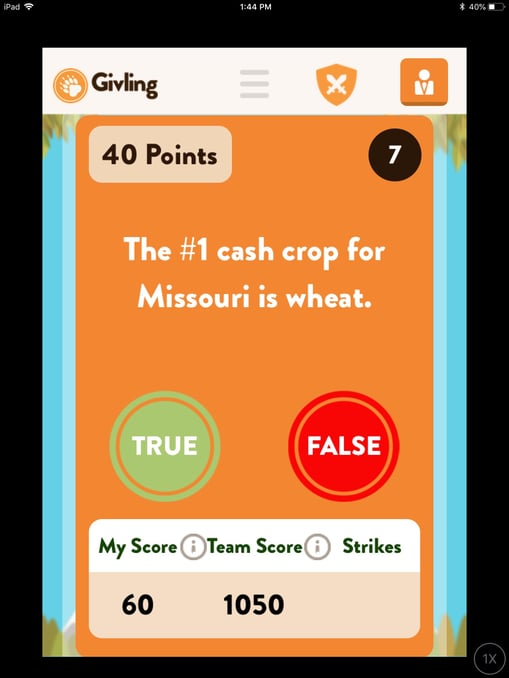 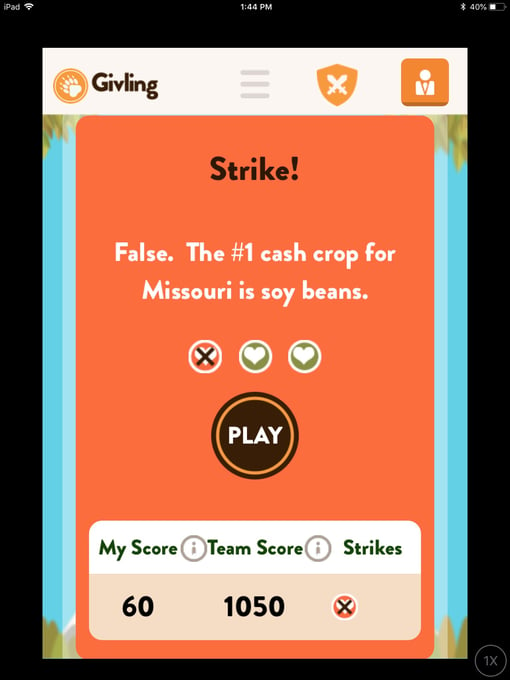 Yup, totally bombed that one.

4. Invite a friend or watch some ads

There are a couple other things you can do to rack up points on the opening “Free Play” screen. Scroll down, and you can watch an ad. Just click on the TV icon in the bottom right-hand corner: 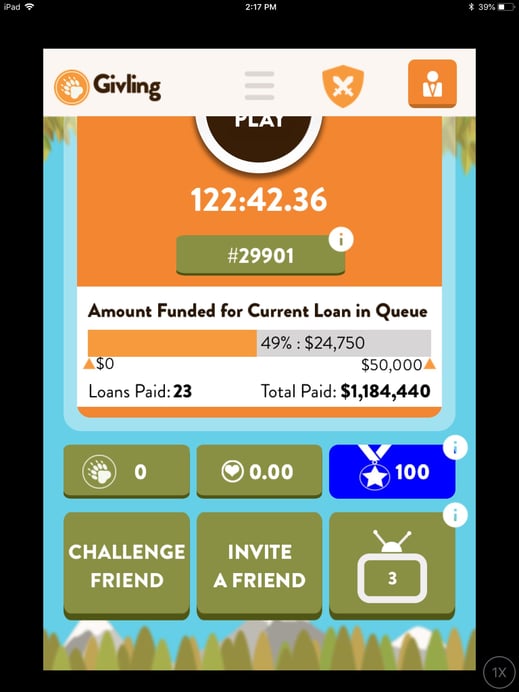 Notice the number in the middle of the TV icon—that’s the number of television ads you’re allowed to watch in an hour.

This is also where you can invite or challenge a friend to play. When your friend uses your Givling invite code to sign up, you get 1,000 points.

Is Givling a scam?

From what we’ve seen in our research, no. It really does pay off real people’s student loans. (And they’re not paying us to say that. We have no relationship with Givling.)

What it might be closer to the truth is that Givling is a lottery.

Yeah, you can up your chances by spending money in the app. But that's true of a traditional lottery as well —where you raise your chances of winning by buying more tickets. And one of the things we like about Givling is that you don’t have to spend money in order to collect queue points.

But you can accumulate the most points, the fastest, by spending money — on Givling merch, sponsor products, and coins.

If you want to avoid spending money on Givling — and you still want to rack up as many points as possible — there are ways to do it. Beyond playing the game and watching the ads, one way is to watch the Facebook page. Givling will sometimes offer bonuses for users who play the game on specific days, or when the company reaches a milestone.

You can also make your Givling invite code freely available online. Every time someone uses it to sign up for the game, you get 1,000 points--so put it everywhere. Your Facebook page, your Twitter handle, Givling-focused threads on Reddit, you name it.

Is playing Givling worth it?

Real talk: what are your chances of actually getting your student loans paid off through Givling? How much time and money do you have to spend on the app in order to have a chance?

As of this writing, there are more than 290,000 people on Givling, all competing for those top-ten loan funding slots—and the company has only paid off 27 loans so far. Those are long odds. (Maybe better odds than the big jackpot on your state lotto, though).

However, Givling is paying off student loans faster as more people sign up and participate. And this app is one of those things that may be great fun for some people; if you play games on your phone all the time anyway—and you’re good at trivia—what do you have to lose? Just don’t pour all your money and time into the app.

Instead, watch the Facebook page for the optimal time to play, watch ads occasionally, and buy coins for triple and quadruple points (to make the money you do spend on the app stretch the farthest). And get really good at trivia. Who knows? Maybe lightning will strike.

Want another way to get your student loans off your back—one that doesn’t so closely resemble winning the lottery? Try student loan refinancing. See how much you could save by checking out Refi Ready.