In recent years, an increasingly common living arrangement for young people between the ages of 18 and 34 hasn’t been getting a small apartment or moving in with friends: It’s living with their parents.

There’s another narrative about millennials you may have also heard. They love living in some of the country’s most popular (and sometimes expensive) cities and will do almost anything to get there. However, both choices depict two very different financial truths for what it means to be young and independent in America today.

So are millennials living on their own or with roommates better off, or are young people choosing to live at home longer making the smarter financial decision? To find out, we surveyed over 1,000 millennials (born between 1981 and 1997) about their current living arrangements, their annual salaries, and how much they accumulated in student debt, other debt, and savings. Curious to see what we discovered? Keep reading. 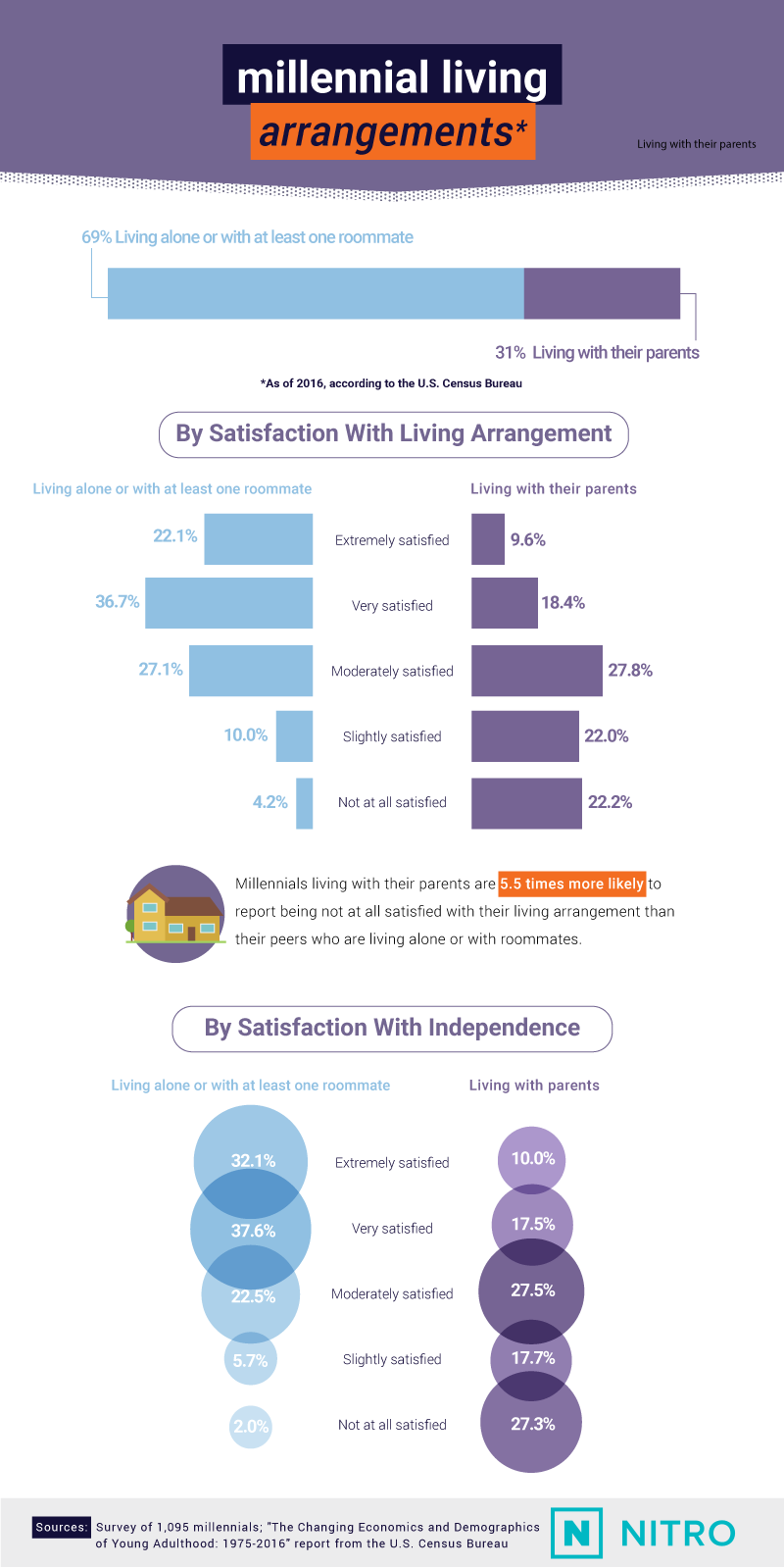 Contrary to popular belief, many perks come with living with parents. Having a safe space to explore the job market, being able to save money for a home or business, and paying down debt are all upsides to living under the same roof for a few extra months (or years). 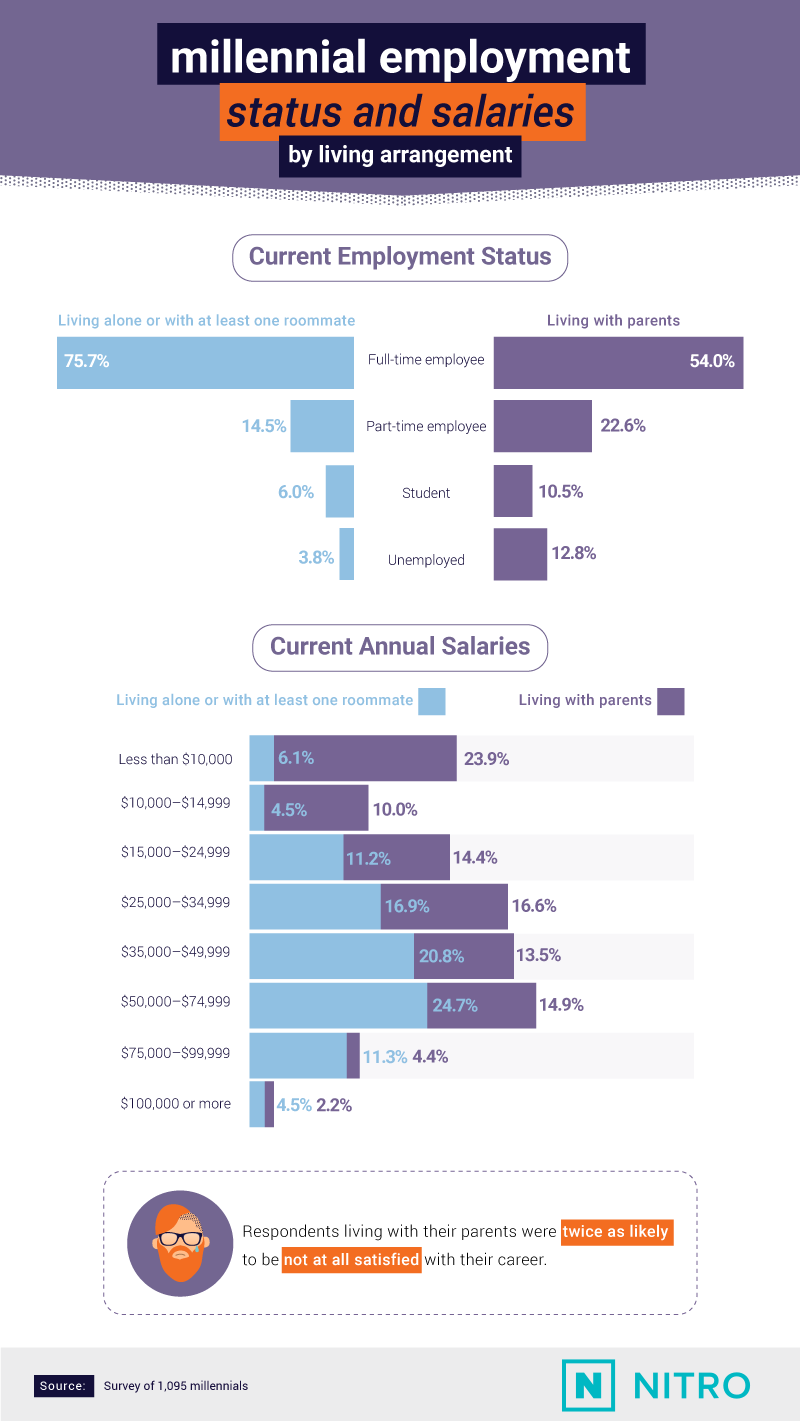 The unemployment rate held at 3.9 percent in August, remaining close to an 18-year low achieved in May, but that doesn't mean every demographic of working Americans has the same level of opportunity. Unlike the national average, millennials living with their parents have an unemployment rate of over 12%, and that may not be entirely by choice. High expectations with their job selection may be a part of the problem, but so are poor education decisions, credit history issues, and the sheer difficulty of outshining older applicants with more working experience.

Finding a full-time gig right away can be difficult for young adults, and choosing to stay home may be necessary while they search. While more than 3 in 4 millennials living alone or with at least one roommate identified as full-time employees, only half of those living with their parents had the same working status. People living at home were far more likely to either be part-time employees, students, or unemployed.

Over 1 in 3 millennials living with their parents also reported earning less than $15,000 a year. Comparatively, 45% of those living outside their parents’ homes reported making between $35,000 and $74,999.

The Truth of the Matter

Millennials often take a lot of flack for their money-saving (and earning) habits. They’re typically identified as spending the bulk of their earnings on things like travel, restaurant meals, and expensive coffee without putting enough money toward goals like buying a home or retiring.

Except that might not always be true. One study found as many as 1 in 6 millennials had combined savings (including their 401(k)s, IRAs, checking, savings, and other investments) totaling $100,000 or more. You might expect that young people living at home have a better chance to stash away that kind of cash.

Think again. While millennials living at home had an average monthly housing cost of just under $287 compared to over $853 for those living alone or with roommates, they had almost $4,000 less in savings, on average, and more than $100 less leftover at the end of the month after their bills had been paid. Despite these discrepancies in saving and spending, people living at home were significantly less likely to pay rent or contribute around the house, such as helping with groceries. 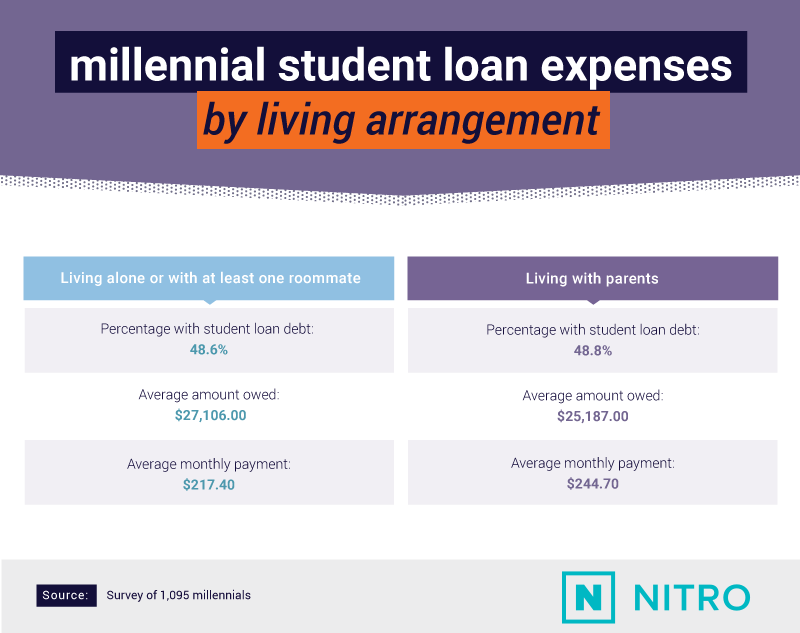 In 2017, Americans had over $1.2 trillion in student loan debt, and millennials are bearing the brunt of that burden. Nearly 2 in 3 young people have at least $10,000 in student loans, and it could take them decades to pay it back. For some, this is the primary reason for staying home with their parents rather than moving out – but that may not necessarily be because their debt is worse than their friends’.

Of the millennials surveyed, almost equally as many living with their parents (48.8%) as millennials living alone or with at least one roommate (48.6%) had student loans, and their average monthly payments were nearly identical (just $27 more, on average, for those living at home).

Interestingly, young people living on their own owed more than millennials still living at home. While they may have initially requested loans with different terms, keeping their monthly payment lower, they may have also refinanced them after graduating to reduce the impact of those payments on their regular finances. 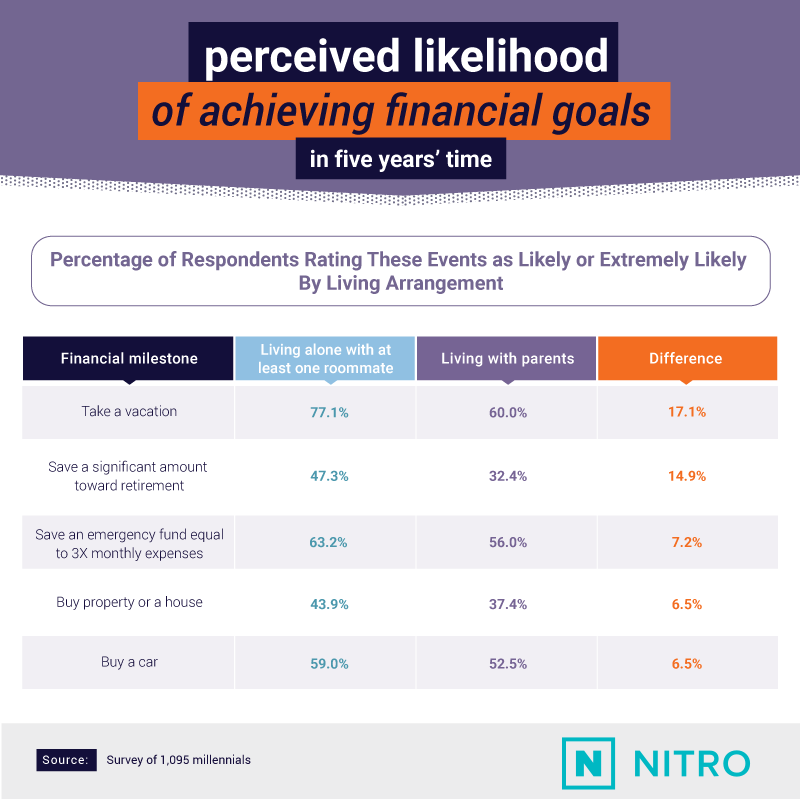 Theoretically speaking, living at home is supposed to get people through school, help them save enough to pay down their debts, and find their dream job without having to compromise for the sake of paying rent. But moving out has its benefits too, and they might help young people create better habits in the long run. Learning more about yourself and from the struggles of having to survive on your own may be slightly more valuable life lessons in the end.

According to our survey, millennials living on their own or with roommates were the most likely to have positive plans for the future. They were more likely than people living at home to rate buying a home or property, saving toward retirement, and taking a vacation as either likely or extremely likely. While experiences are often touted as one of the most important “purchases” for millennials, those living with their parents weren’t as confident in their ability to afford those covetable buys in the next five years. 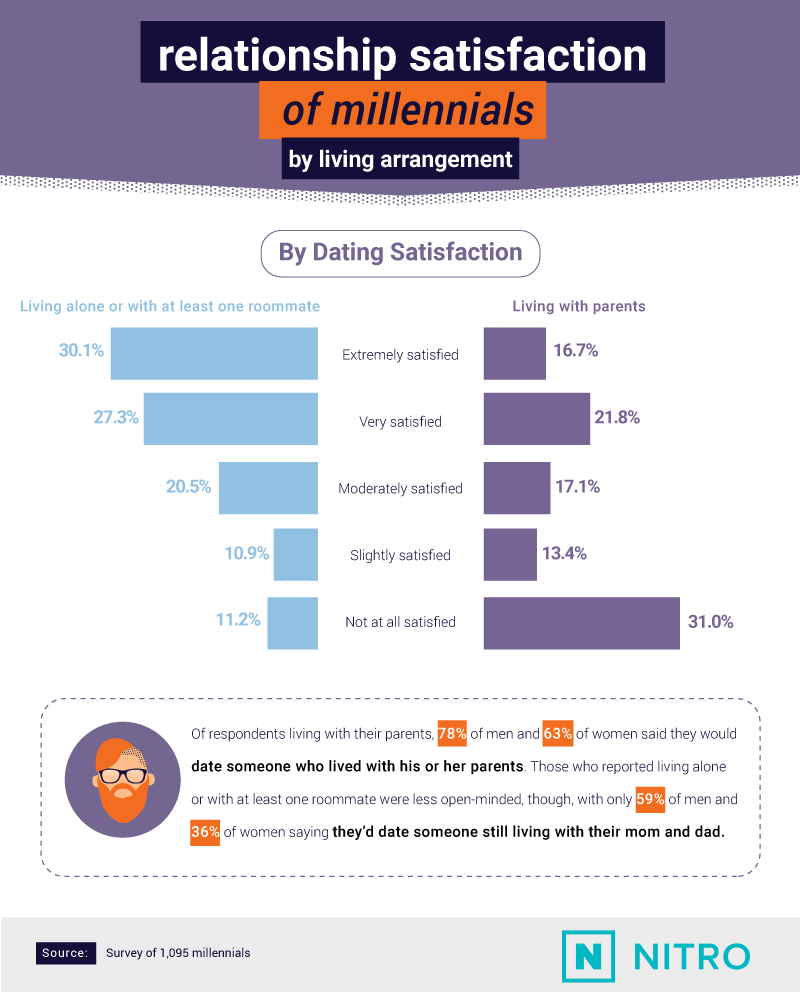 If living at home with your parents can be good for your financial situation or job prospects, there’s one area of your life where you might experience a bit of frustration: dating.

You can spend as much time out and about as you’d like, and even if you’re date is cool with getting to know your family, there’s bound to be tension eventually. Compared to more than half of millennials living on their own or with at least one roommate who were either extremely and very satisfied with their love lives, 31% of those still living at home were not at all satisfied with their dating experiences. And while living with roommates might not be the perfect scenario for your sex life, living with your parents could be worse. Nearly 1 in 3 millennials living at home weren’t at all satisfied with the quality of their intimacy.

No matter their living situations, millennials’ finances have a major impact on their day-to-day lives and future goals. At Nitro, we want you to feel confident in your finances today and help you prepare for the future. Refinancing can assist on both those fronts by helping you save thousands of dollars on your student loan debt. Visit Nitro to learn more.

We surveyed 451 millennials living with their parents and 644 millennials who lived alone or with at least one roommate in two separate surveys through Amazon’s Mechanical Turk. Respondents for each survey had to identify as being a part of the millennial generation (born between 1981 and 1997) and in the living situation tested in each survey – living with parents for one and living alone or with at least one roommate for the other.

For the employment status of the two groups, the options “unable to work” and “military” were included but due to small sample sizes were excluded from our visualization of the data.

All averages presented in our visualizations were calculated to exclude outliers that skewed the data. This was done by multiplying the standard deviation of each data point by two and adding that figure to the original average. Data points above that sum were excluded from the calculation of the average.

When asked about their likelihood of achieving certain financial goals in the next five years – buying a house/property, buying a car, saving a significant amount toward retirement, saving an emergency fund equal to three times their monthly expenses, and taking a vacation – respondents in both groups were given the following options:

The data we are visualizing here relies on self-reporting. There are issues associated with self-reported data, such as telescoping, exaggeration, selective memory, and attribution. This should be considered when reviewing our findings.

Additionally, we performed no statistical testing on the data. The findings shown are based solely on means. Our research was purely exploratory, and future studies should be more extensive.

Know someone who can relate to our findings regarding millennial living? Feel free to share this project for any noncommercial use. However, we ask that you link back to this page so that our findings can be viewed in their entirety and our contributors receive credit for the work they have done.